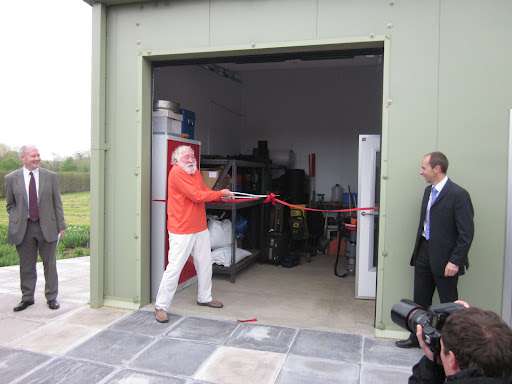 Yesterday I was privileged to be whisked away to a 'secret' part of Wisley not usually seen in public, to witness the official opening of the RHS' new Field Research Centre. As you can see, the ribbon was cut by one of my childhood heroes, David Bellamy.

Readers of Veg Plotting since the early days, know about my passion for science and how I value supporting the independent research the RHS conducts on behalf of gardeners via my membership. It seems the new building has caught the imagination of lots of other members too, because its funding was raised in 9 months instead of the usual 12-18 month timescale the fundraising team work to.

The building might look like a large garage - and was described as such by RHS Head of Science Dr Roger Williams (pictured right) at one point in the proceedings - but its modest exterior disguises the state of the art facilities which lie within. It's temperature controlled to within 10C of a given point without the need for shading. There's a large pool of water beneath the building which acts as a heat sink during the day, so that the heat can then be released back into the building at night when needed. Other efficiency measures installed mean the centre uses less than 50% of the energy used by similar facilities elsewhere.

Environmental variables such as day length, humidity and air movement can all be controlled as needed, so that experiments are conducted in the most rigorous way possible or the impact of the variables themselves on plants, pests or diseases can also be researched thoroughly.


All images are clickable if you want to enlarge them. NB a native wildflower meadow mix sown to surround the building was just beginning to emerge, so we had to be careful not to crush their little green shoots.

Afterwards I was taken on a tour of one of the Plants for Bugs trials sites: it was so fascinating I'm saving the details for another post :)
Other RHS Science related articles:
Garden Visit RHS Testing