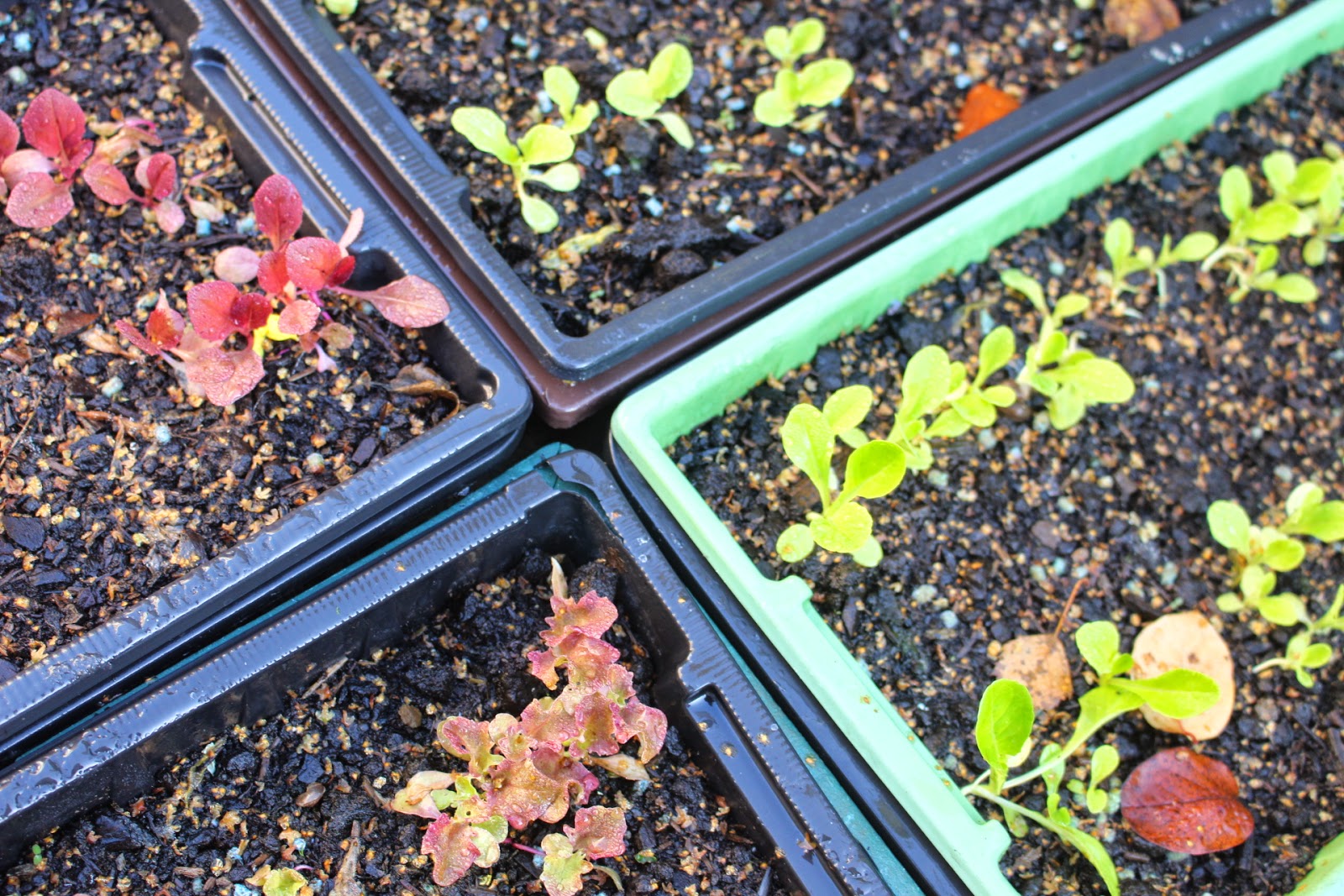 This year I'm trying an experiment with my late sown lettuces. I usually grow them in pots and some old sinks in my cold frames. Everything is fine initially, but the height of the front of frame is too low for the pots placed there and things get a little mushy.

This year I'm trying seed trays instead. These will give the leaves more headroom, but I'm not sure there's sufficient growing media to sustain them for the whole of the winter. However, that can be remedied easily if my fears prove well founded.

I made a relatively late sowing in early September of 2 rows of lettuce seed per tray - 'Merveille des Quatre Saisons', 'Lollo Rossa', 'Little Gem' and 'Salad Bowl', made easy with the use of seed tapes. That's why my rows are so even.

I've kept the trays on the sunniest part of the patio to maximise the light and warmth the trays receive, but as you can see I'm unlikely to be cropping much from them until early spring. They've also suffered the onslaught of the annual Birch seed 'snowstorm' and gained the odd autumn leaf.

I'll put them in the cold frame once the frosts start with a vengeance and I also have some fleece on standby just in case.


My 'Indigo Rose' tomatoes are still cropping and I can report their flavour has improved slightly this late in the season. I've now bought the rest inside to keep us going for a couple more weeks.

Last week saw the first BUG talk of the season, given by Alice Doyle from Log House Plants in Oregon. She took us on a fascinating, whistle stop tour through the vegetable varieties she considers worth growing, which includes the IndigoTM varieties of tomatoes.

It turns out Alice is a member of the collaborative breeding programme which is developing further new varieties under the IndigoTM banner. There are around 20 in the pipeline, of various hues, shapes and sizes. Alice mentioned another variety in her talk - IndigoTM 'Delicious'. It sounds like at least one better tasting variety is on its way.

A set of posters on the Log House Plants website (link opens as a PDF) gives us a foretaste of what is to come and introduces some of the breeders involved. This includes Tom Wagner, who I met in Oxford a few years ago.

Looking back on my blogged notes from that day, I should have guessed he'd be involved as he talked about developing anthocyanin rich varieties of both potatoes and tomatoes. I asked Alice about his potato work and she confirmed it continues.