Michaelmas, Blackberries and the Devil's Spit

Today is Michaelmas Day, one of the quarter days which mark the year in our traditional calendar. It's the feast day of Saint Michael the Archangel (not the shop), who is said to have hurled the devil from heaven for his treachery.

It's the time for the final gathering in from the fields, and harvest festival celebrations. I remember this period referred to as "blackberry week" when I lived in the north east during the late 1970s. Schools gave pupils a week off in early October so they could help their families with the harvest and gather blackberries from the hedgerows.

Michaelmas, blackberries and the devil are connected in our folklore as it's said the devil landed in a bramble bush when he fell from heaven. He then spat and stamped on the bramble's blackberries, cursed them, and scorched them with his fiery breath. This rendered the fruit inedible, so tradition says blackberries shouldn't be eaten after Michaelmas Day.

My research shows the actual date isn't clear as there's also reference to 'old Michaelmas Day' on October 10th (or 11th according to some sources). This is the date Michaelmas Day would fall on, if the 11 days 'taken' when the Gregorian Calendar was introduced were restored. I'd say the folklore pre-dates the calendar's introduction in 1752*, so my money's on October 10th.

I'd also say there's a grain of truth in the folklore, with the story making a memorable warning to everyone that blackberries are usually past their best in October. It seems the supermarket's concept of the 'Use by' date isn't a relatively new introduction after all. 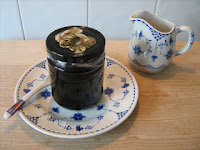 In the interests of research I perused our local blackberries yesterday and can report they're in fine fettle. It looks like we have 11 days left to make the best of this foraged fare. Michaelmas Pie is the dish traditionally eaten today, but sadly the recipe's been lost to the mists of time. I'll make do with Threadspider's fine recipe for Bramble Jam instead.

How are the blackberries looking in your neighbourhood? What are your favourite ways with them? Tell all in the Comments below.