The Secret of the Erigeron Steps

There's a pivotal scene in Alfred Hitchcock's The 39 Steps, when the hard pressed hero Richard Hannay asks the theatre act Mr Memory... "What is the secret of the 39 Steps?" A similar question has teased me ever since I read Christopher Lloyd's Succession Planting for Adventurous Gardeners 12 years ago... "What is the secret of the Erigeron steps?"

They look artfully effortless don't they? And I'm sure the gardeners at Great Dixter have to do quite a lot of editing for their Erigeron steps to look so ravishing. Christopher Lloyd's book was my "lightbulb" moment, when suddenly this gardening lark made sense. It was a picture of those steps in particular which inspired me and became a must-have for the garden. 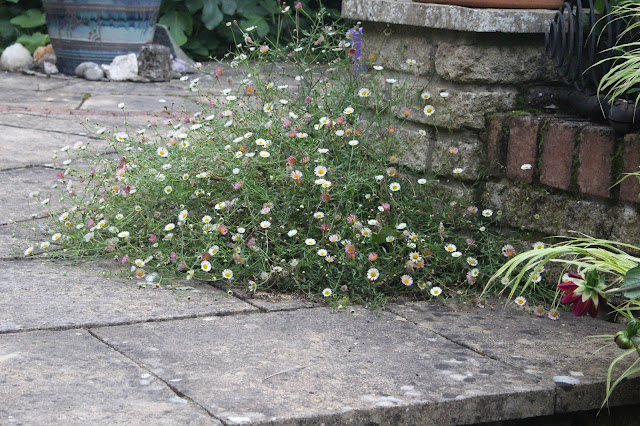 To achieve that aim hasn't proved quite as easy as I'd imagined. I've sown plenty of seed and planted healthy plants, all to no avail. Then a couple of years ago, a small seedling appeared in the spent compost of a tomato pot left to overwinter in the garden. It was tiny, just about large enough to transplant at the top of the central patio steps. As you can see, it's thriving.

My recent trip to Great Dixter gave me Erigeron step envy all over again. My plant is beautiful, but sadly solo... until I went out in the garden last night to take some photos for today's planned post [on a completely different subject - Ed] ... and found another tiny self-sown plant, in one of the box ball pots this time.


I've gently teased it out of the pot and transplanted it on the other side of the steps. Fingers crossed it'll thrive just as much as its predecessor across the way. Then as I bent down to take another photo, what should I find? An even tinier Erigeron seedling... self-sown into the patio steps this time.

So what is the secret of the Erigeron steps? My answer is not to try too hard... and to have oodles of patience.