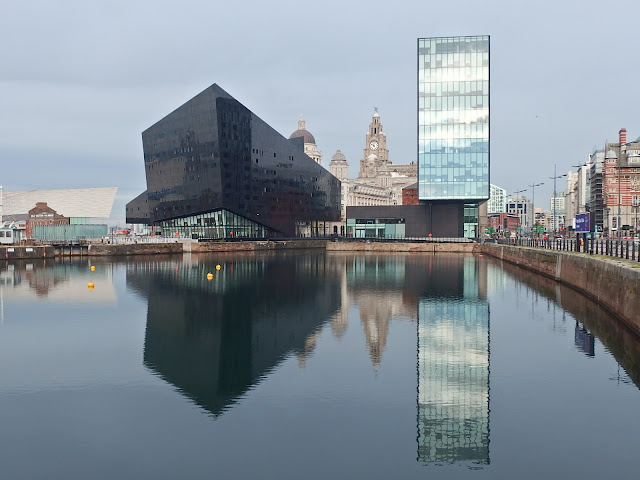 It's nine years since our last visit to Liverpool and my postcard, and the building work along the waterfront which was much in evidence at that time is now complete. Those familiar with previous times may mourn the loss of the old character of this part of the city, but for this visitor it made for a magical Sunday morning stroll.

We were staying in the city centre, so it's just a 5 minute walk to reach the start of our weekend wander at Albert Dock. I love strong shapes and combined with their reflections, I spent a while trying to do these justice with my camera. 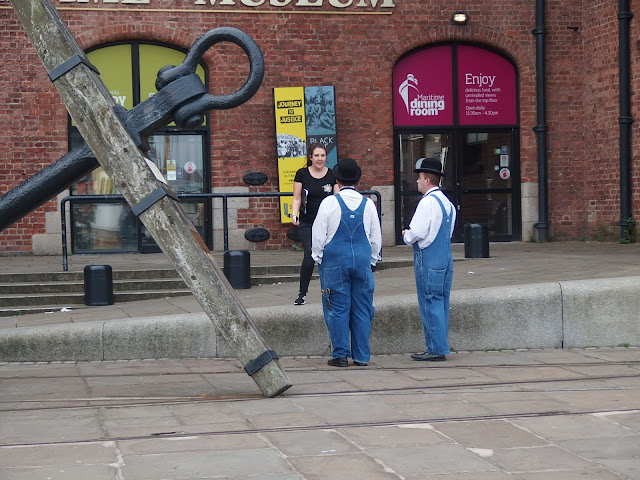 'Laurel and Hardy' were being briefed outside the Merseyside Maritime Museum. Their day had just started when I strolled by. 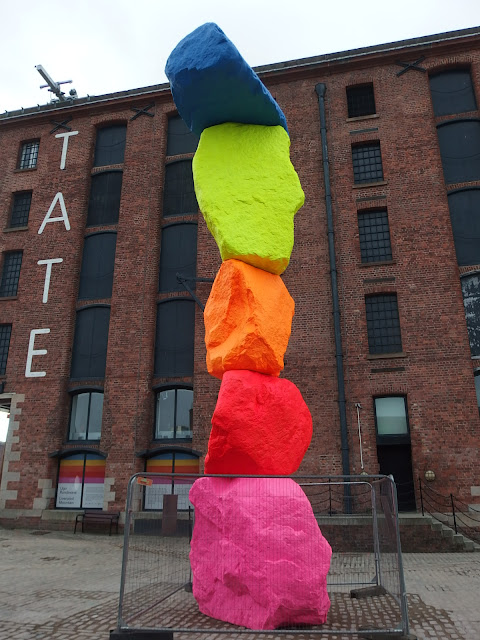 Sadly I didn't have time to go into Tate Liverpool, but that didn't matter as there is plenty of public art on view outside. This is the Tate's latest by Ugo Rondinone. Like The Guardian, I'm not so sure about this one, but that's one of the strengths of being bold with public art. It makes the viewer - well this one anyway - think. 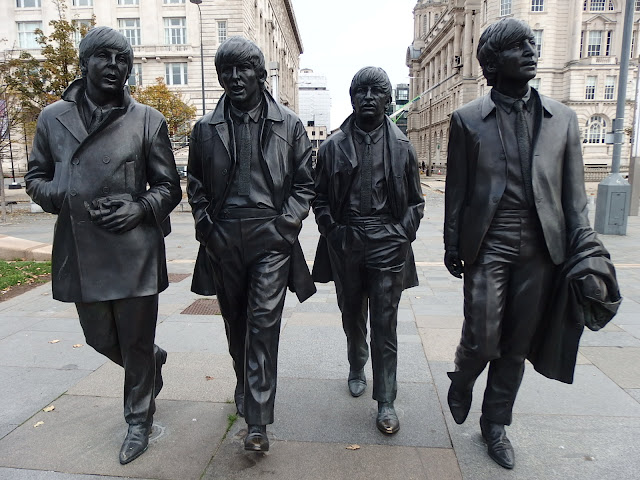 Further along the walk, you'll find the Fab Four going for their Sunday morning stroll close to The Beatles Story. Judging by the number of people posing for selfies and family photos, this piece of public art is a popular one. 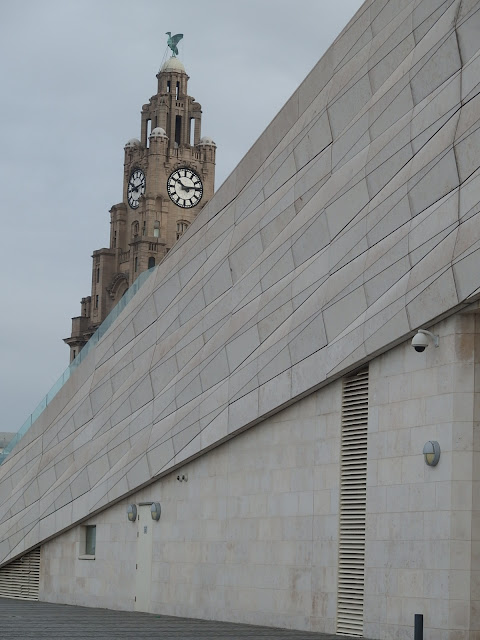 But I'm getting ahead of myself in our wander. One of the criticisms I heard during our previous visit to Liverpool was the possibility the iconic waterfront would be spoiled by the newer buildings. I for one enjoyed this juxtaposition of the new Museum of Liverpool and the Royal Liver Building. 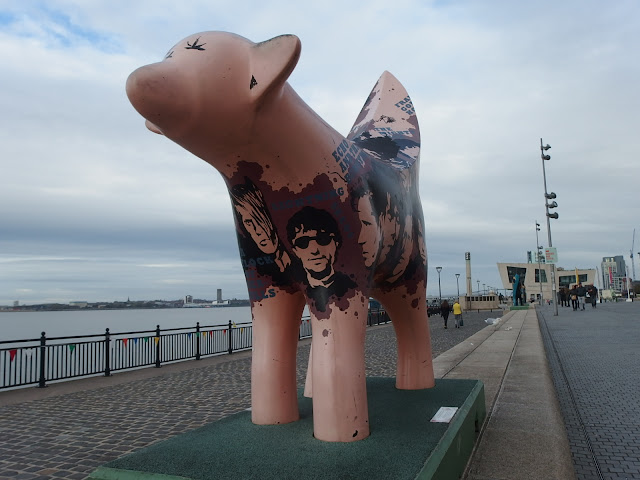 Then I was delighted to find the museum has several Superlambananas outside... 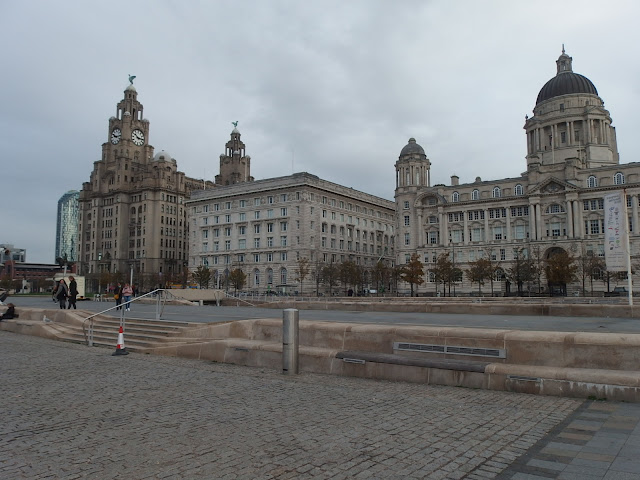 ... and unlike London, it's possible to get a good view of Liverpool's historic buildings which give this area World Heritage status.

Many UK city centres are currently undergoing regeneration of one kind or another. What struck me about Liverpool's is the lack of trendy residential development along its waterfront, unlike Bristol. Instead it's museum after museum, lots of public art, Grade I historic buildings, and an incredible buzz even on a gentle Sunday morning stroll. I loved it.

Don't get me wrong, I love Bristol's harbourside as well. I wonder how much being European City of Culture in 2008 (and 1984's International Garden Festival) set Liverpool's waterfront regeneration along a slightly different path. 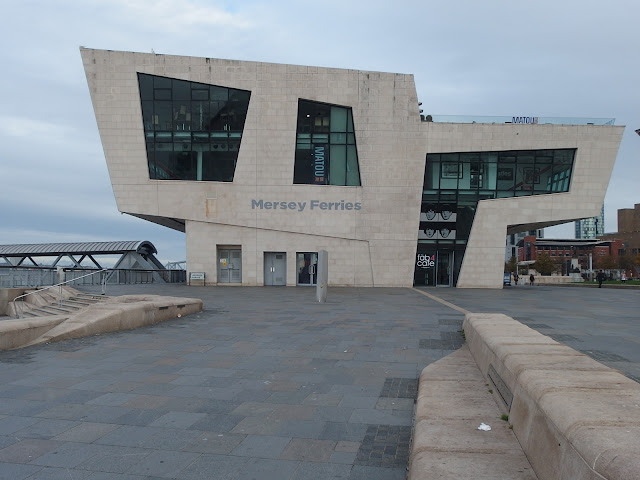 I have an increasing collection of Liverpool photos over at Sign of the Times. This includes some from our visit in 2009, when we took the ferry across the Mersey from the Wirral and explored more widely in the city. This is well worth adding to your itinerary, or you can take a river cruise instead to give you a thorough overview and another great view of Liverpool's waterfront.

Garden lovers may like to note that across the Mersey is Birkenhead Park, the world's first publicly funded civic park, which was the inspiration for Central Park in New York.

A trip to nearby Crosby is well worth the effort to view Antony Gormley's awesome Another Place.

With just a couple of posts from me I hope you can see Liverpool is a fab place for a long weekend.