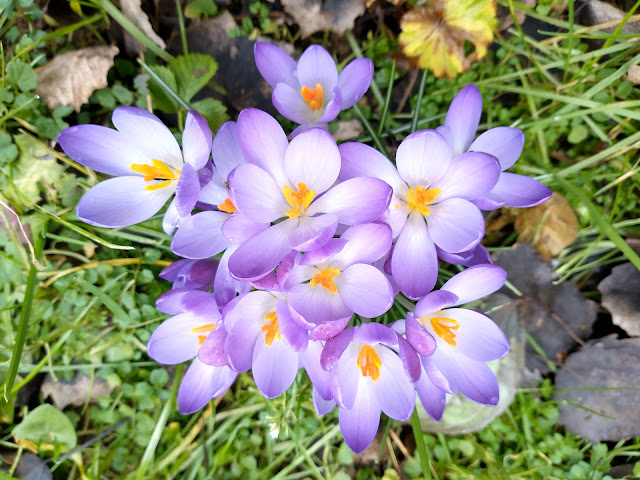 Last year the crocuses I'd planted in the patio planter in direct view from the kitchen disappeared and I missed them. It's always good to have a cheerful sight at this time of the year as I always find February hard to deal with.

This year, the mystery of where they've gone is solved. I spotted a patch of purple winking at me from our bedroom window recently and sure enough, a closer inspection showed we now have crocuses in our lawn. It's not just the patch in the photo, there's the odd one or two scattered in at least four locations close by.

I detect the hand - paw really - of the local squirrel population, who've been cheekily active all round VP Gardens. Special snowdrops are missing from their pots this year. I wonder where they'll pop up next?

I think I'll leave the crocus where they are as they're in the shadiest part of the lawn which struggles to look good at the best of times. I think I can persuade NAH not to mow until the corms are well fed for next year and who knows? In time we might have a display similar to that seen at Lacock.

What garden mysteries have you solved recently?