An End to Chippenham's Conkers? 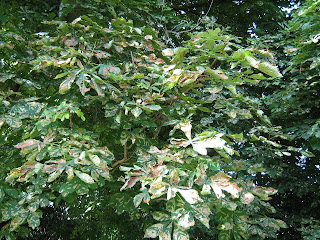 There's an autumnal look to a lot of Chippenham's most stately trees at the moment. They're not signalling an early end to our summer though, but are showing signs of damage by a pest that's marching across the country. Nearly all our Horse Chestnut (Aesculus hippocastamum) trees are affected by leaf miner (Cameraria ohridella) now. I first noticed some minor damage to the trees by our house a couple of years ago. Now every tree on my walk home from the station and those bordering the allotment are showing severe infestation. 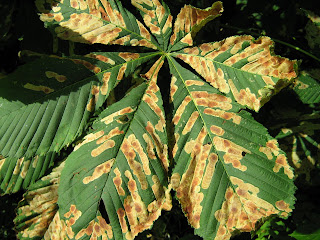 The leaf miner moth was first found on trees in Wimbledon in 2002 and has steadily spread across the country since then. The moth larvae burrow between the upper and lower surfaces of the leaves, resulting in the premature browning seen above. Premature leaf fall occurs during August, at least a month early and can affect 70-100% of the tree's leaves. According to Forest Research, it takes two to three years after first infestation for the damage to reach the levels I can see on the trees in Chippenham. Their distribution map for 2006 shows hardly any infestation in this area, but ackowledges now that damage appears to cover most of southern England and parts of south Wales.
Leaf miner damage to trees isn't new, but Forest Research are concerned that the horse chestnut leaf miner may be more troublesome than most. There's evidence of reduced vigour in young trees affected by the moth and the trees I've seen do seem to have far fewer conkers on them. I don't think there'll be many conker fights in Chippenham's school playgrounds this autumn. Forest Research are keeping a close watch on the spread of this moth across the country and have produced a very good leaflet describing the moth and the damage it causes. It also gives details of how you can help them by sending in samples of suspected leaf miner damage to their Entomology laboratory for analysis.
Chippenham pests n diseases plants Public Planting