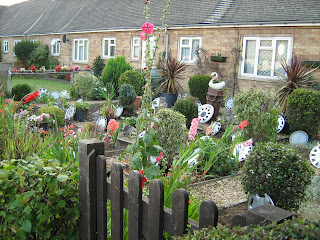 Whenever NAH and I travel up north to visit relatives, we always go up the Fosse Way, an ancient road dating back to Roman times. Sometimes it's arrow straight and with some rather alarming dips - helpfully signed High Risk Crash Area THINK! and BIKE! from time to time - which passes through fine, mellow Cotswold villages like Stow-on-the-Wold and Moreton-in-Marsh.

A couple of years ago, I spotted the pictured garden in Moreton-in-Marsh and it's this very one which inspired me to start my Unusual Front Gardens strand. We usually don't have time on our way up north, so I was pleased to take this picture on Tuesday when I stopped for a break after my fantastic day out with Maggi. As you can see it's a typical front garden, but elevated to the unusual because the owner has decided to use rather a lot of hub caps in the design. I was rather hoping he or she would come out for a chat whilst I was taking the photo, but it wasn't to be. Later on, I saw a hub cap lying in the road as I went through Stow-on-the-Wold: I seriously thought about stopping the car to pick it up and taking it back to Moreton-in-Marsh as a present ;)

Many thanks to those of you who left comments on my first post in this new strand, telling me about some local gardens which may fit the bill. I'll be popping out to have a look at them soon. I'm also indebted to Mark over at Views From the Bike Shed, who's sent me some great examples from his travels in Wales. They'll be featured shortly :)
Front Garden Unusual Front Gardens