I've Got the Commenting Blues 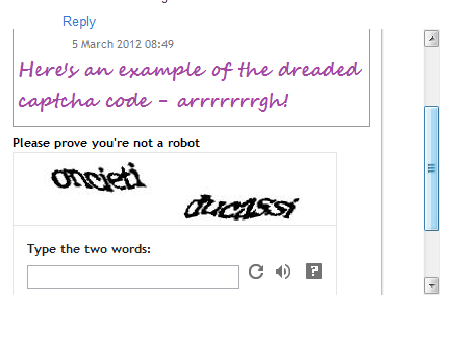 Readers and writers of Blogger blogs can't have failed to have noticed there's a new Word Verification (WV) kid on the block.
A few weeks ago, Blogger opted to use the captcha method: i.e. the one we were grateful we didn't have when reading blogs on other blogging platforms.
I believe it's because quite a lot more spam has been getting though lately and Blogger are trying to make it more difficult for the bots. Trouble is, it's a hell of a lot more difficult for humans too :(
As a result I've been tinkering with the way comments work on Veg Plotting. The WV so many of you hated has gone. So far this hasn't increased the amount of automated spam arriving in my comments. *crosses fingers*
Instead there's been a phenomenal increase in the amount of spam trapped by Blogger's spam filter. I also started getting around 10-30 spam comments per day in my inbox, as I'd opted for forwarding comments to my email.
So last week I switched off that option. Result? I received none of the emails I like to see from genuine commenters, but I still got all the hated ones from all the spam. Not quite what I wanted :/
I then considered what else I could do:So what have I done?
I'm no longer allowing Anonymous comments even though I don't like solutions which may discourage genuine comments. So far it's stopped the spam and I've heaved a great sigh of relief. I was also cheered to see Lu left me a comment yesterday.
It would be good to know if Blogger have any more changes planned because they could negate any solution I'm contemplating. I believe I still have some changes to do, hence my commenting blues.
Increased spam isn't just an issue on Blogger blogs. I've seen a marked upturn on my WordPress ones recently too. One cheekily congratulated me on my blog post, but said it was a little too spammy!
How do you manage your blog to encourage genuine commenters, whilst keeping out the spam?
Update: I forgot to mention I use Comment Moderation on blog posts greater than 10 days old. However, I found this does not stop the spam in its tracks when I removed WV. An email to moderate is still an email to deal with :(
Blogging Grrr