You Could Be in Chippenham! 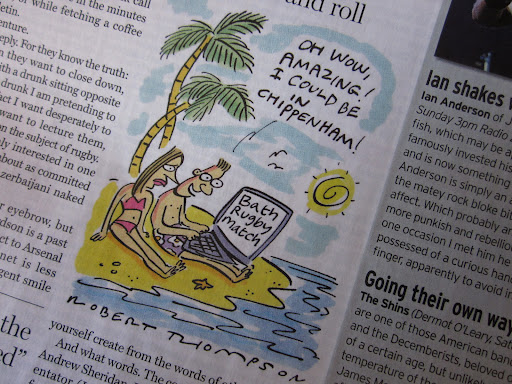 Chippenham's making the mainstream media lately. A few weeks ago, it was featured in The Guardian's regular Lets Move To... slot* and now, this week Justin Webb mentions it prominently in his Radio Head column in the Radio Times.

He's talking about how the power of the internet is enabling people to keep in touch with their roots: in this case keeping up with the live commentary from the rugby game in Bath, the team he supports. He says:

When I grew up in Bath, BBC Radio Bristol was a fine station if you were no further away than say, Chippenham. But, my lovers, as we say in the west, Chippenham feels like a dream to me now.

My son and I - nearly 80 miles east of Chippenham - fiddled around a bit with the local radio websites and suddenly - as clear as if we were sitting in the Roman Baths - we were by the pitch.

So if you find yourself on a desert island like the couple in the cartoon, fear not. Just fiddle around with that laptop you magically have to hand and like me, you could be in Chippenham ;)

Here's hoping these prominent mentions are a good omen for the town's Portas bid...

* = though any Chippenham resident reading it would have spotted it wasn't that well researched, or something was lost in the edit. E.g. St Mary's Street is magically relocated to East Tytherton, which is quite a way out of town. But hey, a feature's a feature :)
Chippenham