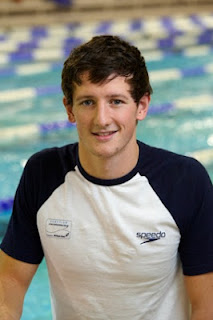 NAH and I have been watching the GB swimming Olympic Trials with great excitement this week.

NAH because his ex-training team mate Stephanie Millward has secured her place on the paralympic team and me because I'm loosely involved with the hopes and dreams of Michael Jamieson, pictured on the left.

Since December I've been looking after Smiths News' Community Week blog, which brings news of all the company's fundraising efforts for various charities.

They're also supporting Michael's efforts to reach and compete in London 2012. He's the son of one of the staff working at the head office in Swindon and he trains at nearby Bath University.

Both NAH and I have trained at this pool and can vouch for the superb facilities there. It's also very close to where Threadspider and I go to the fab talks put together by Bath University Gardening Club.

After our disappointment in not getting the tickets we'd hoped for the Games (to the swimming of course!), it's rather marvellous to be involved in this way.

Those of you who know me on Twitter may have been rather puzzled by my non-gardening related tweets over the past few days, so now you know!

I'm looking forward to seeing more like this over the coming weeks: