October 15, 2012
My thoughts are beginning to gel re the revamped terrace beds which I've been mulling over for quite a while now since the demise of the 'sentinel' conifers early this year. 1. Rosa 'Kew Gardens' to froth over a larger version of a peony basket which NAH has promised to make, and 2. Have lots more Dahlias of the single flowered kind for the bees.

3. has taken me a bit by surprise because it involves Salvias, something that's relatively new for the garden. I've tried (and killed) S. 'Hot Lips' before, but the small plant I acquired at Combe Trenchard in early June has thwarted any attempts for an early demise so far.

I did think I'd planted it in the wrong place as this year's Dahlias were threatening to shade it out completely. Instead it's sprawled comfortably from underneath them and looks like it's leaning over the terrace wall for a long chat. The Dahlias' days are numbered and next year the Salvia will be growing well way before they poke themselves back up through the soil. Close by is S 'Royal Bumble', bought entirely for its chucklesome name and deep red flowers. Sadly there's no blooms to show you at the moment, so you'll have to wait until next year. 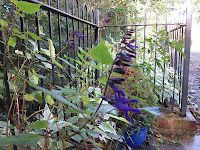 I first encountered S 'Amistad' at Capel Manor in June and it's my plant of the year. It's a taller Salvia with the most amazing deep purply blue flowers. I bought these at Tatton, so they're also a souvenir of happy times :)

Has a plant taken you by surprise this year? Any favourites to report?