Of Flying Ants and Citizen Science 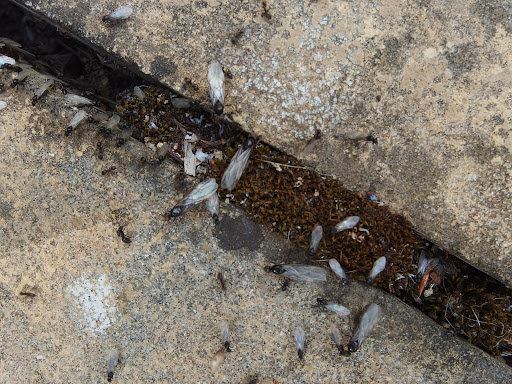 Last Thursday our patio was heaving with hundreds of flying ants as they made their getaway to mate and find pastures new. I'd seen the odd ant around previously, but hadn't quite realised how many we actually have. They were pouring out of around 10 places between the slabs, plus both large containers outside the back door were transformed into writhing black from their usual terracotta.

I'm wondering if we have lots of nests in our garden all co-ordinating themselves in some way, or was I witnessing an emergence from some vast subterranean network beneath our feet?

Thanks to @BrotchieLight (who hails from Canada), I was alerted to this fantastic blog, contrasting Lisa Smith's experience this year with an account of 'flying ant day' written in 1707. Her post also links to the Society of Biology's flying ant survey which invites everyone to send in details of their experiences.

An earlier survey of 6,000 'citizen scientists' has already dispelled the myth there is just one day each year when this phenomenon occurs. The results show it happening over a number of days in July and August with two peaks of especially high sightings either side of a low pressure system moving across the UK.

It also showed emergence tends to occur between 4 and 6pm. I took my photograph at 3.57pm after watching my ants for around 5 minutes, so they were slightly on the early side. We had rain on Tuesday, so that fits in with last year's low pressure system observation.

Whilst last year's results dispelled a myth and made new discoveries, the Society of Biology is repeating the survey again to see if the results show that this is the usual kind of ant activity, and to discover fresh insights. I've already filled in my survey which took less than 5 minutes. Here's the form, so you can join in too.

Update 1st August: I had a second flying ant day today at 12.45pm. Not as massive as the first one, but on a very hot day after rain on Monday (lots + an all-day storm) and Tuesday.

And whilst you're outside, why not take part in The Big Butterfly Count too? It's the perfect excuse to sit and enjoy your garden for 15 minutes :)
Chippenham Events Goals Weather Wildlife