Book Review: Out This Week 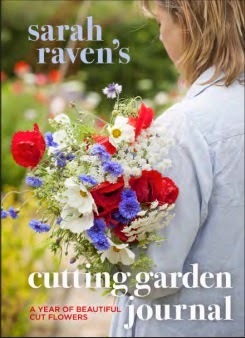 Each chapter has flowers of the month and a monthly project as well as the space for notes. Particular jobs and techniques plus consideration of the equipment required are sprinkled into the months where they are most likely to be needed. On the whole this is successful, but I thought the planning, design and stocking of the cutting patch/garden, plus the guidance on flower arranging would have worked better as separate chapters instead of being divided across various months.

The details for the flowers and foliage featured include suitable named varieties, plus cultivation and conditioning notes where needed. A wide range of bulbs, annuals, perennials and shrubs suitable for flower arrangements are all considered.

There is an assumption that all the flowers and foliage are obtained from the fairly large dedicated patch (10ft by 15ft) shown in the design sections, without offering much guidance on how to adapt the suggested plan to suit the reader's own circumstances. This is probably because Sarah Raven wrote about her extensive experience of her patch at Perch Hill, so adaptation and other potential sources such as hedgerow foraging aren't needed. 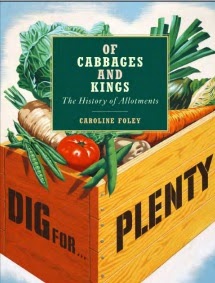 Most allotment histories I've read are confined to the past couple of hundred years (the birth of our modern day allotments), or to a particular aspect such as the wartime Dig for Victory campaigns.

Caroline Foley's Of Cabbages and Kings differs because she has traced their history much further back to show how they're rooted in the feudal system developed after the Norman conquest in 1066.

It's a fascinating account, which shows how events such as the Black Death and the resultant enclosure of land which started in medieval times affected the majority of the population's ability to feed themselves.

I was surprised to learn that Elizabeth I passed a law which decreed a cottage must have a minimum amount of land attached to it so that its inhabitants could be self sufficient. This is the root of our current allotment laws and was designed to counteract poverty. Sadly it wasn't really acted upon until centuries later - perhaps developments such as the dreaded workhouse and the Riot Act wouldn't have happened if it had.

I gave up history at school when it became a list of parliamentary acts and wars to memorise rather than showing the way people lived. Caroline Foley brings those same acts and wars to life by providing the context of their social history.

I was amazed to learn that Lord Salisbury's government was brought down in 1886 over the allotment question. With so many allotment sites under threat today and at least 3 court battles being fought currently, it shows our passion for the need for land has some very deep roots indeed.

Both offers include p&p for the UK; please add £2.50 per book if ordering from overseas.

To order, telephone 01903 828503 or email mailorders@lbsltd.co.uk and quote the offer code APG200 for Sarah Raven's Cutting Garden Journal, and APG209 for Of Cabbages and Kings.

Both books are officially released on September 4th and are published by Frances Lincoln. Either or both would make great presents for the gardener or allotmenteer in your life.
Books