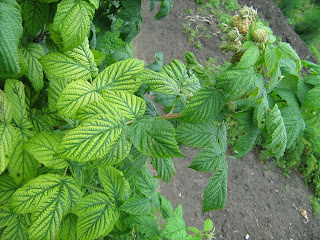 For the past couple of years my raspberry foliage up at the allotment has tended to look rather sick and this year is no exception. I've ruled out a virus as these tend to give the foliage a mottled appearance rather than the distinctive veined patterning you can see in my picture. I'd also ruled out the usual mineral deficiencies, such as iron or manganese I've previously seen in my garden as these tend to affect the younger foliage first. In my photo, the younger foliage at the top of the plant is a healthy green and the problem gets worse the further down the plant you go.

But then I got pondering the ideal conditions for growing raspberries: a neutral to acid soil and loamy, perhaps with some sand. Mine's the complete opposite as it's lime with clay. Clay soils are notoriously fickle about hanging onto their nutrients, even though they're considered to be a nutrient rich soil. Time for a bit of Googling...

...and there you have it. Looks like I have what's called Lime-induced chlorosis, which is a posh way of saying you're-growing-an-acid-loving-plant-in-alkaline-conditions-which-is-poorly-adapted-for-absorbing-the-trace-elements-it-needs-from-that-kind of-soil. And it turns out I have a magnesium deficiency as this affects the older leaves first. Magnesium, iron or manganese are the usual minerals which are deficient and the clay soil isn't helping as it tends to hold onto these elements quite firmly. According to the link, waterlogged conditions don't help either, which makes me wonder if that's why I've only spotted the condition in the past couple of years. Whilst I grow my raspberries at the top of the slope, last month's rainfall and the past couple of wet summers have been rather extreme. The saving grace in my book is that I haven't noticed any drop in yield.

As it's a magnesium deficiency, I could try a foliar feed of Epsom salts using crystals obtained from the chemist to counteract it. For iron or manganese deficiencies, those specially formulated feeds for acid-loving plants available at garden centres could be used instead. However, that would only cure the problem for this season. I could also put something like flowers of sulphur around the plants to acidify the soil, but I suspect the 'power of clay' would soon return pH levels back to alkaline and thus I might shell out my cash for very little return.

So, I'm planning on carrying on as usual, especially as I'm getting oodles of raspberries at the moment. However, I am pondering the large conifer tree at the end of my plot. It sheds rather a lot of needles which I can't really compost as they're too acid for the health of my heap. I'm wondering whether a well-rotted mulch of needles, might help in the longer term especially as I'll have a pretty constant supply. Time to rescue some of my pallet stash from the nettlebed at the bottom of the plot to make a nice 'needlemould' bin methinks.