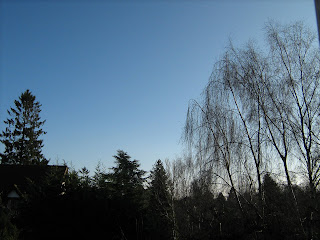 Today's fresh blue sky from our back bedroom window
If Christmas is all about our families, then New Year's Eve has always been about friends and neighbours for NAH and me. For most of our life together it's been simply a massive party with something suitably fizzy at midnight, first footing and a quick burst of Auld Lang Syne. Last night was no exception, but in the past few years things have also become a little more structured.

Our neighbours started it all off by hosting a thrilling murder mystery evening one year. I played the part of a titled WWII codebreaker and we had to find the murderous spy in our midst. Lately we've had a quiz, with each family invited to bring a round of questions on a given theme decided by our hosts. For last night's events NAH and I were given the task of summing up the first decade of this millennium in just 10-20 questions.

We had great fun putting our list together yesterday and finally decided to keep things short and sweet by selecting 10 questions out of our shortlist of around 30. Just as well, because the previous rounds combined with lots of drink and yummy food breaks meant we became quiz masters at around 11.30pm. I thought you'd like to muse over them too for GBMD - they're rather GB-centric and non-gardeny, but I hope you'll find them a bit of fun after a hard night of celebrations and all of you should be able to find out the answers by fair means or foul! You're welcome to leave your answers in the comments and I'll add the 'official' ones in a couple of days time.

Unlike The Constant Gardener's fiendish Christmas quiz, I'm afraid I have no lovely prize to award. Just the kudos of being Veg Plotting's new year quiz champion :)