Wildlife Photographer of the Year 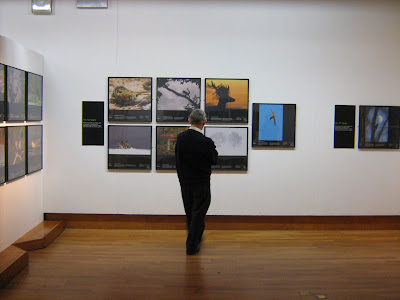 On Saturday my friend H and I got the year off to a good start by visiting the Wildlife Photographer of the Year exhibition at the City Museum in Bristol. It was strange to think this room had been one of the main ones used for the Banksy exhibition last summer as it was now back to a normal looking gallery rather than being full of fun and mayhem. However, evidence of Banksy was still to be found in certain other corners of the museum ;)

As expected, the photographs were of an extremely high standard. My overall favourite was a black and white shot of millions of starlings, blurred slightly to give the feel of them whirling around in the air trying to avoid the predator in their midst. This photograph particularly resonated with me because I've attempted to count similar sized flocks in Mallorca, where they were often seen dive bombing marsh harriers. Also one of my clearest winter memories from my early days of working in Bristol were of tens of thousands of starlings coming home to roost at Temple Meads Station in the evening. Sadly they're no longer to be seen over the city in such numbers: I believe they moved on when the roof of the station was restored in the 1990s to alternative roosts at Chew Valley lake and in the Somerset levels.

The exhibition is in Bristol until 10th January, or you can view it online here. It was an excellent start to my own personal celebration of the UN's International Year of Biodiversity.

Update 20/1: I've just heard on the radio news that the winning entry's been disqualified because it's of a captive animal being used as a model. Here's a report from December's The Guardian speculating that it might be so, with a picture of the photo concerned. This is the statement shown on the competition's website, confirming disqualification. The photographer denies that an animal model has been used.
Events time out Wildlife