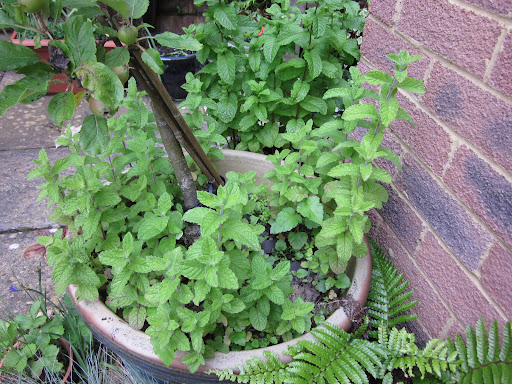 I had such a terrific response in my comments last week when I asked for some ideas for using mint in salads, I just had to follow them up with a post of their own.

As you can see I'm having no problem with growing Tashkent mint - it's self-seeded itself from the pot towards the back of the picture into the much larger pot which is home to one of my apple trees. As this mint likes to spread as well as self-seed, I think it's a good idea to use up this unexpected bounty before it starts affecting the tree.

NevilleB (sorry Neville, I can't link to you) suggested:

Just enjoyed a salad for lunch at a a favourite pub that uses seasonal ingredients - baby broad beans (shelled) with crumbs of fresh sheep's curd and finely chopped mint in a light vinaigrette served with a couple of slices of light and airy focaccia with massive holes! Delicious, I've used goats curd myself which has a a slightly stronger taste, or you could use the mint with small pieces of feta.

Mark Willis suggested Tabbouleh. I've only made this dish using flat leaf parsley before, so I'm hoping this Otto Lenghi recipe is what Mark has in mind.

My go-to salad for mint is a Nigel Slater one, with radish, cucumber, spring onion, mint and flat leaved parsley: veg cut chunky, except the spring onions,which are finely sliced; use the whole parsley leaves and roughly torn mint; mix together in a salad bowl; crumble over some good quality feta; then dress roughly with a glug of red wine (or homemade blackberry) vinegar, a larger glug of good ev olive oil, and some pepper. Very, very good. It's always a hit when I serve it at parties.

Mel has promised me her recipe for blackberry vinegar for Salad Days too :)

Liz, my Salad Days regular recipe contributor from Oz has the following ideas:

Other than tabouleh, which is my favourite salad of all time, try beetroot mint and feta, or pumpkin, orange, mint and quinoa. Luckily she has all her recipes on her fab blog, Suburban Tomato. Liz - your beetroot, mint and feta recipe is on my menu for tonight :)

A quick google of mint and salad resulted in the following delicious sounding recipes:
I also tried to find Nigel Slater's recipe online, as mentioned by Mel. Instead I found his mint recipes article from The Observer which describes a different, more of an eastern influenced salad containing mint, plus lots of ideas for unusual non-salady uses.

I'm pondering a variation on potato salad when my new potatoes are ready on the allotment. Potato and mint go so well together, I'm sure it'll go well in a salad too. If not, then I can always have a side dish of buttered new potatoes and mint to accompany my salad!

My very simple version is to take some newly boiled new potatoes, cube them, then coat with either mayonnaise or salad cream (depending what I have to hand), plus some snipped chives if I have some. I see the mint replacing the chives in this case. However, this more complex version, from The Guardian contains both mint and chives. You may also like to look at this collection of recipes for making potato salad, not necessarily containing mint.

Looks like I have lots of experimenting in the kitchen to come :)