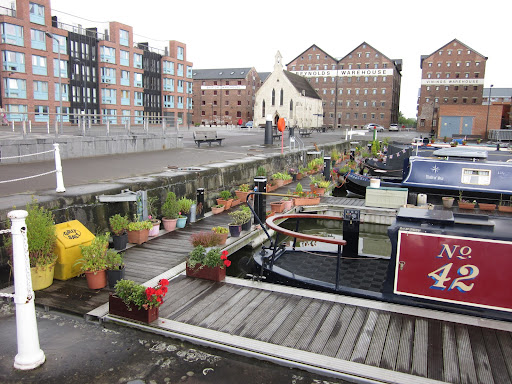 Just like Dr Foster, NAH and I went to Gloucester in a shower of rain yesterday. A few seconds after I took this photo, it was hammering it down and we had to run for shelter.

Wherever narrowboats have a permanent mooring, it's pretty much guaranteed their roofs and other outside areas will sprout a host of various pots and containers so the owners can grow a few herbs or salads for dinner, or lots of flowers to sit alongside the colourful traditional canal art usually painted on each boat.

At Gloucester Docks the pots have been transferred canalside (we're at Victoria Basin) to provide a colourful walkway instead. I learned later that the residents were winners in the Street Regeneration Competition in 2007, held as part of Gloucester in Bloom. It's good to see they've kept going :)
Front Garden Out on the Streets Public Planting RHS time out Unusual Front Gardens