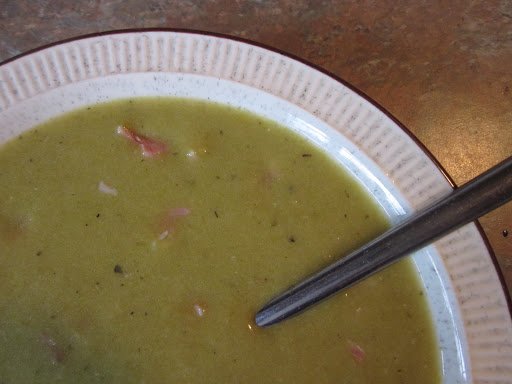 A ham at Christmas is part of the traditional fare in both NAH's and my family, so it's become part of our tradition too. For some reason NAH decided to come home with a smoked gammon joint which weighed nearly 3 kilos. For just the two of us!  So now seemed the appropriate time to make pea and ham soup using the stock obtained when I boiled the ham for our Sunday dinner.

The key to usable stock is to soak the ham for 24 hours with plenty of changes of water along the way (to reduce the salt - this won't affect the flavour of the cooked ham) and to not use cola (as advocated by Nigella I believe) instead of water for the final change of liquid and cooking. If you're still worried about salt levels, you could always use chicken or turkey stock or a low-sodium stock cube instead.

I've used a mixture of half and half split peas to frozen peas for the pea portion of the soup to keep costs down and to help give the final result the green colour my mental image of it demanded. You could use 100% of either if you prefer - bear in mind a split yellow pea version will probably come out the colour of pease pudding. This recipe would also work with the substitution of lentils (in their various guises) or bacon as appropriate. I also used the green tops of 4 large leeks - again to help with the final colour. You could use 2 large leeks or a large onion depending on what you have to hand.

It's the use of the Christmas ham stock, leeks and comfort-food pulses which makes this a seasonal recipe, but really it's suitable for year-round if desired.

Adjust accordingly depending on how much stock you actually have. This version makes 4 servings.

NB If the soup tastes salty, diluting it further or adding a peeled and quartered potato to the hot stock and simmering for 30 minutes can help. The potato should be removed before serving.
recipe