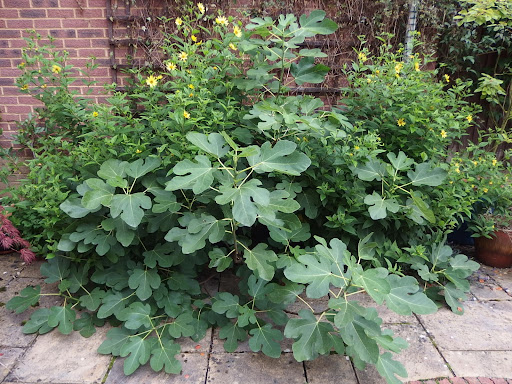 My fig tree ('Brown turkey') has exploded into life this year and I hear it's happened to other blogging pals too. I don't quite know why that is, but for mine it's because I'd earmarked it for the compost heap ;) It had around 8 years of being a few sad twigs hidden amongst my sunflower 'Lemon Queen', and until now it really wasn't pulling its weight.

As you can see it's now pushed the sunflowers aside to show off its foliage. And this is from a fig tree which is planted in a pot just 16 inches across. Figs like their roots to be confined but the soil by next door's garage was just a little bit too shallow for it, hence the pot. What a difference a year makes - it's quite a fine specimen now isn't it? 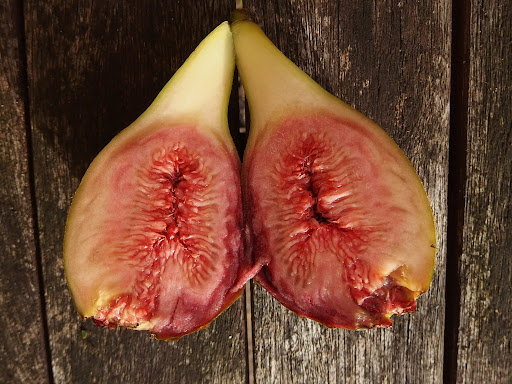 My fig also had another surprise up its sleeve: its first proper fruits. Until now it's just borne tiny ones, but as you can see, this year I have figs of edible quality (and a bit of a rude looking photograph!). I thought long and hard about how to serve my first fig: perhaps wrapped in a slice of prosciutto ham, or with a huge dollop of natural yoghurt on the side. Decisions, decisions...

Instead, I finally decided to serve it au naturel. The flavours and juices of one's first fresh fig should be savoured just as they are. Yum :)
Fruit n Veg Garden