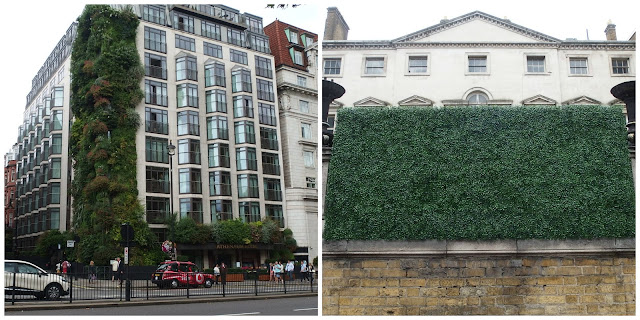 Back in the summer on a trip to London, I at last found some time to gawp at the Athenaeum Hotel's green wall. Designed and executed by that master of vertical gardens Patrick Blanc, it's a fantastic showstopper on Piccadilly.

Imagine my surprise to find another green wall just a few doors down the road, using plastic greenery this time. You can decide which one's which in the above photo.

It looked like the artificial one was being used to screen the building work being carried out on the former In and Out club aka Cambridge House. This was a private members club for officers and gentlemen of the armed forces which relocated to nearby St James's Square in 1999. The building lay empty for many years, which is surprising for a Grade I listed building in such a prime location.

Earlier sources said the building is set to be the nation's most expensive home once renovation work is complete, though judging by the the latest reports it's unclear whether the site will be a home, a new watering hole, or a combination of the two.

Sadly it doesn't look like £214 to £300 million [depending on which source you read - Ed] will buy you a proper green wall when it's finished.

Separated at Birth The Great Green Wall Hunt time out