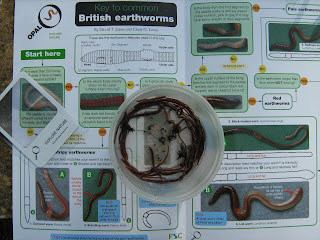 I'm feeling a little like I'm following in the footsteps of Darwin again at the moment as I'm using my garden as a laboratory AND studying earthworms. I'm taking part in OPAL's Soil and Earthworm Survey: this is an initiative set up to celebrate biodiversity and people's partnership with nature, something that's right up my street.

They're planning a number of scientific surveys in which schools and the general public in the UK can take part. The first of these is earthworms and my study pack arrived a couple of weeks ago. I have booklet detailing what I have to do, an earthworm identification key (put together by those lovely people at the Field Studies Council), a magnifying glass and some basic soil testing equipment. I'm surveying both my garden and allotment: I'm particularly concerned that my garden's earthworm population might be a little on the low side as I rarely see them when I'm digging.

As well as digging a little pit to test my soil and look for worms, I also need to survey any other microhabitats within 5 metres of my chosen patch. Here you can see some of the many earthworms which occupy my compost heap. Most of them are juveniles (as the survey expects), but those which are large enough to use the key further, come out as compost worms (Eisenia veneta) or brandling worms (Eisenia fetida), both of which are usually found in compost heaps. Now all I have to do is to keep them still, so I can measure them!

The survey is on from now until May and you can still take part. They aren't sending out any more packs like mine, but the link takes you to where you can download the survey pack and earthworm identification guide. All you need to add are a couple of packs of mustard and vinegar, a couple of pH testing strips, plus a plastic ruler and you're fully kitted out to take part! I'll be uploading my results onto the website very soon and seeing how they compare with others in my area and nationwide. Scientists at Imperial College and the Natural History Museum are also very interested in seeing the results.

The OPAL website is well laid out and packed with information - well worth a look. I see they're also concerned about bee populations at the moment: something that should be of concern not just to gardeners, but to us all because of their vital role in food production. I've just clicked through OPAL's link to the Save Our Bees website which is launching a bee survey to coincide with the start of National Science Week on Saturday.

News hot off the press!!! The RHS seed trial this year is mange tout and sugar snap peas - yum. If you'd like to take part, you need to look pretty sharpish and go here. The first 200 to sign up will be given their seeds by Thompson & Morgan. I was too late for the free seeds for last year's radish trial, but I joined in anyway.