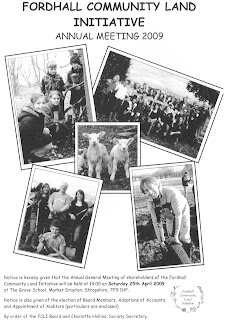 I received an invitation to an AGM yesterday. Usually these make me feel tired instantly and they tend to go straight into the recycling pile. However this one's different, as you can probably guess from its cover. How about the following agenda:
12-2pm - Bring and Share Lunch and Registration
2pm - Formal AGM
3.30 - Tea and Coffee Break
3.45 - Green Care Lecture - Dr John Hegarty from Keele University talks about the importance of access to green space for our well being, plus Danny O'Sullivan talks about the Leaside Wood Recycling Project he founded
5.30 - Break Out Time - have a look at Fordhall's information boards or go for a walk
7-9 pm - Barn Dance and Hog Roast
In addition, younger shareholders who aren't interested in the AGM (though their parents might be) will have their own activities such as bug hunts and arts n' crafts.
If only all AGMs could be so imaginative! The Fordhall Farm story is an amazing one. It's about a young daughter and son's fight to keep their father's farm despite development pressures to evict them. Not only that, their father's approach to organic farming inspired the founding of the Soil Association. I was so moved by their story I decided not only to make a donation, but to become one of many thousands of shareholders who've ensured the future of the farm. It's a fantastic community initiative that I'm proud to be part of and you can find out more about it here.
Goals time out