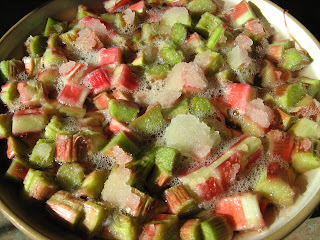 Once the euphoria of new season forced rhubarb has died down, I simply can't keep up with all the sticks my single Victoria rhubarb plant sends out. Perhaps I need to stop the annual manure feed in February and things might calm down a little.

This year I'm intending to make better use of my allotment surpluses. So bearing this in mind plus our dwindling jam mountain - we 'inherited' about 20 jars of varying vintages and flavours last year when NAH sold his mum's house - I made some rhubarb and ginger jam yesterday. Since leaving work, our jam consumption has risen significantly as NAH usually has some with homemade bread for lunch, so replenishing our stocks seemed a wise move.

My trusty Good Housekeeping Cookery Book - first published in 1948 and still going strong - has the recipe I use. It makes 3-4 jars as follows:

Method
The recipe says use within 12 months - we've just opened a jar from 2005 and it's still scrummy.

Tips, Wrinkles (literally) and Variations
* = I think I need to set the YAWA team onto finding out all about jam vs jelly vs Jello forthwith.
Fruit n Veg recipe