Unusual Front Gardens #6: The Hanging Gardens of The Barbican 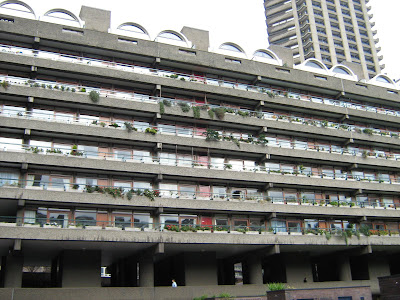 Most people associate The Barbican with its many arts activities such as drama, dance and film. However, the area's also home to around 4,000 people in just over 2,000 flats and maisonettes. The buildings rose from the ashes of a severely WWII bombed area in central London: its architecture is a prime example of Brutalism, a post-war movement which gloried in the wonders - and the relative speed and cheapness - of concrete.

Like most rebuilding projects at the time, city planners envisaged a Utopian new world for the Barbican area. Their finalised concept is rather like a walled city within London, containing spacious raised pedestrian walkways, a lake, plus numerous 'secret' communal gardens to soften the gloomy concrete. Building work commenced in the 1960s, with much of the residential complex completed in the 1970s. The Queen officially opened the Arts Centre in 1982 and the entire complex was awarded Grade II listed status in 2001.

I don't usually go for this style of architecture, but there is something different about The Barbican. I think it must be the plentiful public open space which helps to take away the usual oppressive atmosphere which I associate with this kind of development. Until a couple of years ago my job often took me to London where I worked with people based in Gresham Street and Old Street. The Barbican is on the way from one to the other and I used to relish my walks through this area on the way to meetings. I was always struck by how most of the residents made sure they planted up their balconies with something colourful to spill and trail over them.

Even on a wet morning in December last week, that planting's still very much in evidence and brought the Hanging Gardens of Babylon to mind. This link has oodles of information if you'd like to know more about the area: including its history, architecture, gardens, and a peek inside some of the flats (aka apartments). A one bedroom flat will set you back between a quarter and half a million pounds at today's prices.

Update 28/6/2014: Today's Guardian has a fascinating feature on one of the residents and his gardening endeavours, who also refers to the "hanging gardens of Barbican".
Design Front Garden Unusual Front Gardens