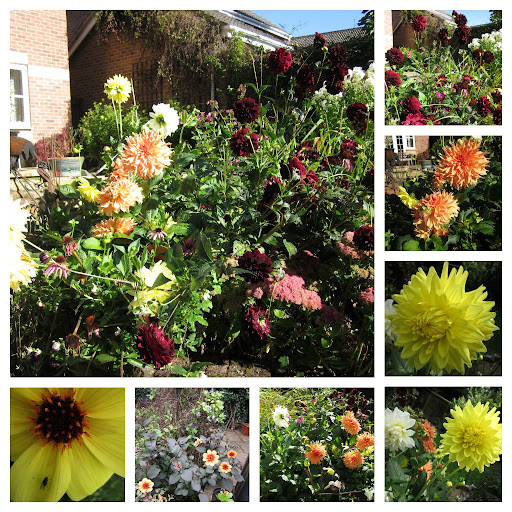 We arrived back too late for Blooms Day this month, but since then we've been thoroughly enjoying this year's Dahlias which came into peak production whilst we were away. It seems appropriate to use them instead to brighten up this wet and miserable Monday morning. The photos show them as a bit of a jumbled mess, but I'm loving the wider view from our kitchen window.

The removal of the sentinel conifers has given new life to dark, dusky D. 'Arabian Night'. Previously I was lucky to get three blooms at once. This year, I'm getting at least thirty at a time. Across the steps, I and the bees (as well as the pictured fly) are loving the simple yellow flowers of D. 'Knockout'.

I've also been trialling some mega big Dahlias courtesy of Thompson & Morgan. They're in the catalogue as v. 'XXXL' and the mixture of yellow, white and orange are what I was sent (though you can also order them in their single colours). They're certainly most striking and whilst initially I was horrified at having massive orange blooms in my garden, I now think they're great.

T&M's catalogue claims these flowers don't need staking. I'm having mixed results, though I suspect my treatment of them before planting out has more to do with it. A combination of an early arrival of the cuttings with a very wet, cold spring meant they were surviving woefully mistreated on my windowsill for three months before I planted them out. They got a bit leggy as a result, which I think has contributed to their tendency to lie down in the garden.

I've planted these Dahlias as a 'stop gap' whilst continuing my step sitting ponderings for a more permanent planting for the old conifer areas. My conclusion so far is Dahlias will continue to feature, though probably in their single flower form. The huge double blooms look fab in full flower and last for ages, but they aren't attractive to bees and haven't died that well. They tend to curl up into a brown mush rather than prettily shedding their petals like the single flowers do.