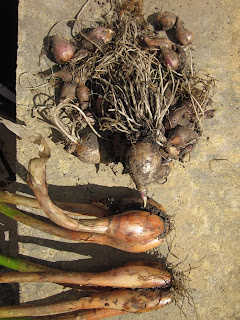 I've now harvested my Echalote Grise and so this year's experiment has come to an end. As you can see the differences I noted in my update earlier in the year have continued.

The ones from the sets at the top are relatively plentiful though mostly really small in size whereas the shop bought at the bottom are fewer and larger. The latter come close to the size of both types planted at the start of the year.

This year's wet weather meant that most of the crop rotted into the clay, so it's hard to make a comparison by weight. The difference in appearance makes me wonder which are actually Echalote Grise shallots.

The shop bought crop is quite soft, so these will need using up very quickly. Therefore I won't be trying growing these again as one of the beauties of growing shallots is their fantastic keeping qualities.

I've ordered some sets for next year's experiment: a comparison of growing with and without biochar.
Allotment Fruit n Veg Testing