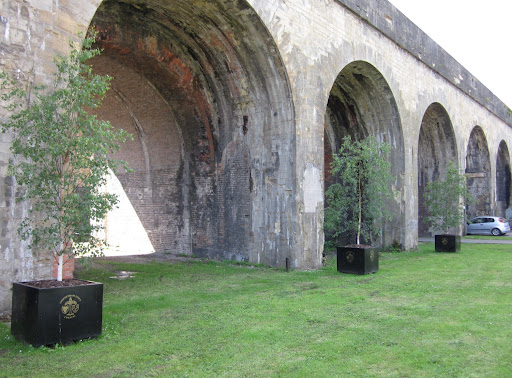 A couple of years ago I showed you the High Street transformed by the addition of 10 birch trees placed in strategic places. Chippenham was originally destined to have 20 trees and I've often wondered what happened to the others.

Well, this year some of them have been placed in front of the railway viaduct which dominates the town centre. I've often pondered this location: the viaduct is a listed building and part of Chippenham's heritage. But it's stonkingly big! It also cuts right through the centre of town. My visit to Kilver Court highlighted the possibilities. Their use of a tall, though  unfashionable planting of conifers* around a similar railway viaduct looks just right.

That kind of scheme wouldn't be right for Chippenham's viaduct, especially as access is needed for repairs and I suppose there might be a potential crime issue if too much became obscured. Personally I'd prefer the trees to have been planted to reduce the watering needed and for them to potentially reach a greater height. However, in view of the location I suspect this might not be possible and a compromise has been made.

I'm looking forward to seeing how this particular public planting develops with time :)