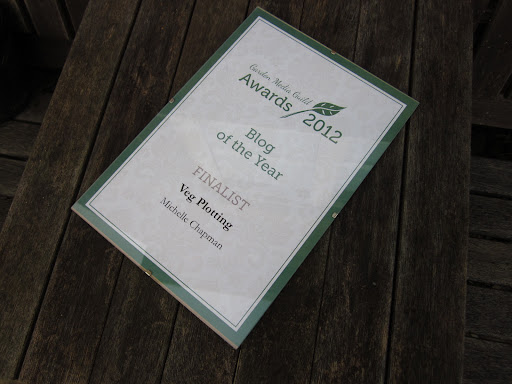 Apologies to those of you who've seen this on Facebook or Twitter already, but I have a few things to say which need to be said within Veg Plotting itself.

Firstly, a huge thanks to all of you who've contributed to this blog in some way this year - as a guest poster, by leaving a comment or contributing to #saladchat or Salad Days. This award is because of you :)

Secondly, a number of you took the trouble to get in touch by email after the awards last year re the judging. Like you, I was extremely disappointed not to have been shortlisted. However, it gave me a chance to look again at the way in which I'd submitted Veg Plotting's nomination. Whilst what I'd said was OK, I hadn't really told the judges enough about why Veg Plotting was special (to me anyway!) and different to any other blog out there. I set out to change that this year.

With a change of event organiser for 2012, the opportunity's been taken to do things slightly differently this time and all blog entrants were listed in the 'book of the day' given out to all attendees at the awards lunch. From that I see the number of entrants was down this year and I strongly believe a number of 'independent' bloggers who deserve to get the recognition I've had are missing from the list.

If you value your blog and what you write about, I urge you to enter in 2013. I know some of you aren't keen on the entry fee or the self-nomination process. The entry fee covers the admin and postage needed for the awards process and is comparable with the fees I've seen this year for writing competitions. As for self-nomination... well you have to be in it to win it. Besides, we don't have friendly editors or publishers to shove us into the limelight - we're those things as well as being the author and photographer!

Going forward I hope to encourage the judging process to include feedback for all entrants in some small way. Hopefully this won't be too onerous a task for the judges (who are probably queueing up to throttle me now) and means we'd have something to work on (if we want to) in the future. If you have any observations you'd like to add, do let me know. I've just been elected onto the Garden Media Guild's committee and so have the power to make your views known!

Finally, huge congratulations to the Guardian Gardening Blog on their win. They have an extremely talented set of regular bloggers, so were always going to be the one to beat. It's been a pleasure to write a guest post for them this year :)
Blogging Competition