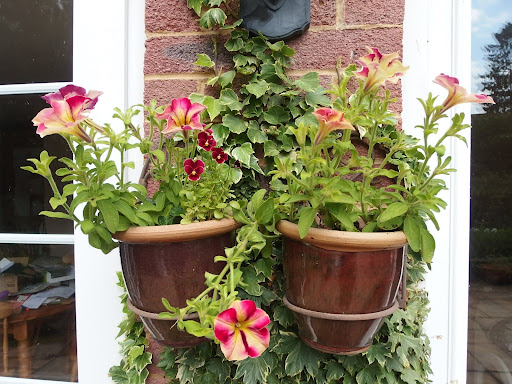 My summer pots usually feature a petunia somewhere, so I was pleased to have the opportunity to trial a new variety called 'Crazytunia Pulse' this year. As you can see their growth is more upright than usual, which I'm very pleased with. I've found their sturdier nature means I'm not seeing the usual dieback I have with other petunias.

However, I was a little nonplussed by the flowers. I've been nurturing these plants indoors since early April and the flowers I'd had before planting out at the end of June were a gorgeously velvety wine red. Whilst these blooms are still acceptable, that dark red had spoiled me. I thought the paler blooms might be due to lack of feed, but as you can see they've continued flowering in the same way after I'd fed them. 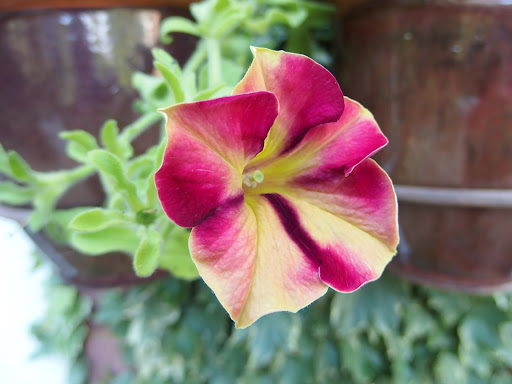 Here's a closer look at that lower bloom in the top picture, so you get a good idea of what my flowers look like... hold that thought... 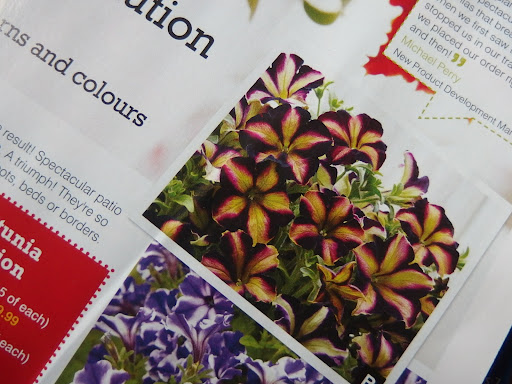 ... because this is how they look in the catalogue I rediscovered last week. As you can see they're completely different. So I had a little ponder... my feeding and watering's OK, but the flowers not only look different to the catalogue but also to those I had earlier in the year. How could that be?

So I asked Michael Perry, Thompson & Morgan's New Product Development Manager via Twitter, who confirmed what I'd been suspecting:

"We've found they can be very sensitive to light and temps.. And actually don't need lots of fert, better colours when neglected..."

The proximity of my 'Crazytunias' to my Salvia 'Hot Lips' - it also changes colour with temperature - gave me the clue, which Michael confirmed in his DM :)

Come to think of it, changing flower colour in response to environmental conditions isn't that rare. For example, we all know about the change from blue to pink in lots of hydrangeas depending on whether the soil is acid or alkaline...

... we also get leaf colour changes in the autumn - chlorophyll production slows down, then stops due to changing daylength and falling temperatures, which allows the other leaf pigments to shine through...

... and a bit of light googling revealed flower colour variation is common in Hibiscus (there's a very interesting read all about it here), asters* and daylilies. It seems flower colour can vary owing to changes in temperature, light conditions (cloudy, sunny), pH, daylength, watering, feed, plant stress, or a combination of any of these.

I found the above quote via a question asked about flower colour variation in a discussion forum on plant botany. Apparently raised anthocyanin levels means more red pigmentation is seen, and carotinoids affects the amount of yellow.