Rosa 'Kew Gardens' is a new addition to my garden. So new it hasn't been planted yet. I obtained it as a gift from David Austin Roses when I visited Easton Walled Gardens recently. I hadn't intended to have a new rose, but somehow it ended up in my arms.

It seems right to have a rose which has a resonance with happy times at Kew (meeting David Attenborough and organising volunteer weekends there) and has a simple flower which echoes the rugosa roses which are planted around the estate. My nose crinkled with pleasure many times on the way home as its scent wafted from the back seat over to me in the front. It's thornless, has tiny red hips for the winter, grows to about 5 feet in height and repeat flowers. The perfect rose for my garden. 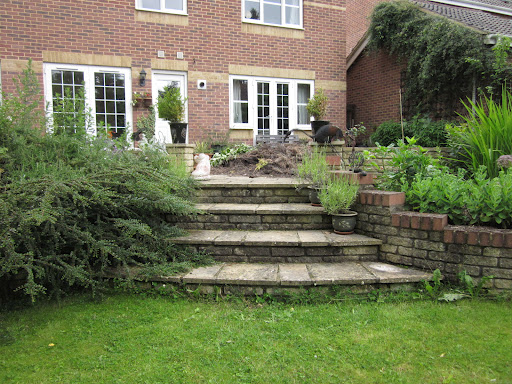 It'll form the centrepiece to the revamping of my terraced beds. Since we had the sentinel conifers chopped down earlier in the year, I've been pondering what to do with the space they've left. Slowly I'm removing much that was around them: the self-sown Cotoneaster to the left and the sword-like Crocosmia to the right are both due to go and the space currently has some temporary Dahlias for late summer colour this year.

I haven't really decided what will go there, but some thoughts are taking shape. I was pondering having an arch (which was in the original design), but I'm currently favouring a 'basket' like the ones I saw at Easton Walled Gardens to show off my new rose. 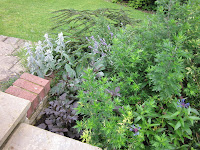 I also like this contrast between the silvery Stachys and the dark leaved Dahlias (click to enlarge to see more clearly!). I also like the architectural form of the Crocosmia and the way the morning light shines through the leaves. Could be a good spot for the right kind of grass perhaps? I want some scent down the pathway to replace the potted lavenders which aren't that happy in their current home and I'm favouring reds and blues for a colour combination.

I'm also thinking about Salvias. I've already taken the plunge and bought S 'Hot Lips' (which I've since planted in the wrong place) and I fell in love with S 'Amistad' when I saw it at Capel Manor last month. I also like S 'Caradonna' very much, despite it being used pretty much in every show garden I've seen recently.

Today I'm off to see Karen for a few days and then on to Elizabeth's and the delights of Tatton Park flower show. These Blooms Day notes aren't just so I have my current thinking about the garden in order, I hope they'll help my discussions with Karen and Elizabeth. Talking through planting opportunities with gardening pals will be such a treat over the next few days :)