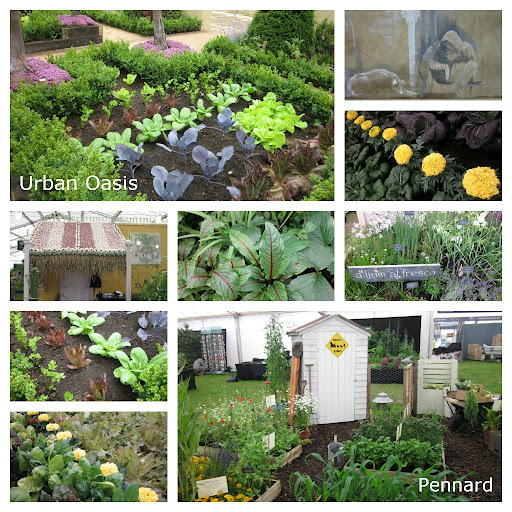 The RHS Hampton Court Flower Show is always a safe bet for plenty of Grow Your Own ideas because it's at just the right time when our plots are reaching their peak production. This year it was slightly harder to find because the RHS chose not to have a GYO theme for its large, central exhibit but to promote their community gardening campaigns (Britain in Bloom and It's Your Neighbourhood) instead.

However, there was still plenty of good, food based planting to be found in Chris Beardshaw's Urban Oasis. Along with The Edible Bus Stop (which I featured in this week's Wordless Wednesday) I thought this exhibit was just the shot in the arm community gardening needs. It's presented in conjunction with Groundwork UK, who will ensure much of what I saw will be used in several of their projects after the show.

The Constant Gardener and I had a bit of a debate about the bronze coloured lettuce in the third picture down. Is it 'Relic' which she grows (and rates highly) or the Heritage Seed Library's 'Bronze Arrow' so beloved by Gwenfar? There's only one way to find out - grow some of the 'Relic' seed I've just found lurking in my seed tin :)

The Growing For Taste marquee was the place to be for all things edible. Pennard Plants always give good value with their display (see also last year's Showing the Sheds) and I took particular note of their raised bed scheme. I've just taken the plunge and invested in several raised beds for the allotment - more on this soon.

Elsewhere Dobies mixed colourful salad leaves with a companion planting of marigolds - I particularly liked the contrasting Pak Choi in the top right example. I've just sown some of the darker leaved 'Rubi' and it was very tempting to pick off a leaf to see if my choice tastes as good as it looks.

The middle picture is just a taster of Otter Farm's forest garden display, showing there's a place for edible leaves such as red veined sorrel in this kind of scheme. Sara Venn shows you the full extent of this exhibit in her blog of her visit. She also spotted an excellent display by Herbs and Beans which had a useful  list of salad leaves suitable for sowing now to keep you well supplied until Christmas. How come I missed that?

Finally, I fell in love with The Garlic Farm's twist on a green roof and their exquisitely planted Allium al Fresco display. Theirs is always a great exhibit (which deservedly won gold) and just squeaks into my blog about salads because we love to use garlic in our salad dressing!
52 Week Salad Challenge Out on the Streets Public Planting RHS Showtime