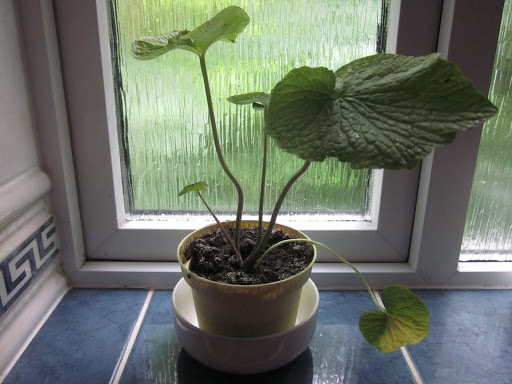 Whenever I've seen a plant droop and its leaves start to go yellow, it's always been because I've either over or under watered it. Wasabi is the first plant I've seen which has reacted to light in the same way.

I'd been keeping my plant on our sunny kitchen windowsill whilst deciding on where to plant it out, when I noticed its leaves were drooping alarmingly. A quick move to our much duller bathroom windowsill and you can see most of the leaves are much perkier now, with just the yellowing one showing how the rest of the plant looked previously. That leaf is past saving, but luckily a new one has started to emerge to replace it.

I'm glad I've had this early warning because the place I'd earmarked on the allotment won't be suitable. Instead, I've decided that the space underneath the apple trees is just what it needs. This is doubly good as I'll be making use of an area I was regarding as 'dead' space.

When we met on Wednesday, Matron told me the commercially grown wasabi in Hampshire utilises a similar gravel bed and running spring-fed water system as used for watercress. She's devised an ingenious solution and the perfect growing conditions for her wasabi as a result. I don't have the same option for mine, so I'm going to improvise a bog garden instead. There won't be running water, but it should be suitably damp and shady. I'll keep you posted on whether my plant likes its new home.
Fruit n Veg Incredible Edibles