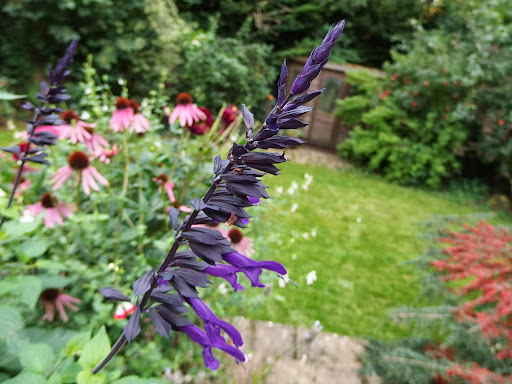 I've been really pleased with how my new Salvia 'Amistad' (well, bought at RHS Tatton show in 2012) has settled into the garden this year.

It's stood up strongly to the autumnal storms which lashed their way over the garden the past couple of weeks. Seeing the stems swaying in the wind reminds me of the pictures of prayer flags I've seen fluttering over the Himalayas. You might think I'm being a bit fanciful, but I at least can see a link between the two.

It's a most dramatic plant, with its dark almost black stems holding court in my large terrace bed. They're quite a contrast to the pinks and reds you can see dotted around in the background above. It's quite tall for a Salvia, so I'm glad I've placed it in a corner, where it leans over conversationally as I make my way down the steps towards the shed.

I've been thinking quite a bit about this 'purple patch' lately. Most of my purple happens earlier in the year, though I do currently have a softer echo with my Erysimum 'Bowles Mauve' in the double terrace bed opposite. Some of the sights I saw whilst on holiday in Ireland have brought about this musing; I'll have more to show you on that score another day.