In honour of today's Apple Day, I'm returning to last month's study day at Waterperry Gardens, where we learnt lots about the summer pruning of trained apple trees such as cordons and espaliers. Note this pruning does not apply to apples grown as bush or standard trees; their pruning is confined to the winter period.

Summer pruning is carried out on the shoots growing out from the main branches. This is to increase the number of fruiting spurs on the tree for the following year and to let the sunlight through to ripen the current year's crop. The RHS guidance says that this pruning is best carried out in the third week in August in the south and around 10 days later in the north. 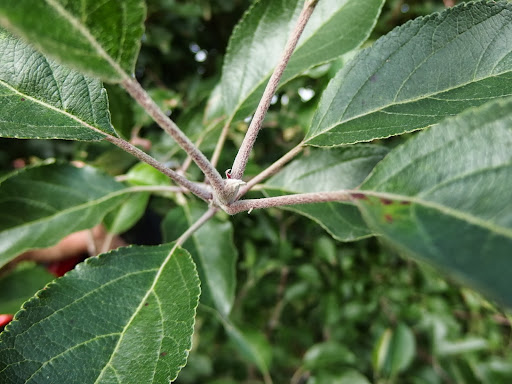 This guidance also says the pruning should be done when the bottom third of the new shoot is firm and woody. This timing is judged according to the tree's vigour, its location and the weather conditions at the time.

We found out this latter guidance is more important, rather than the August timing. If pruning is carried out too early, then the pruned shoot will continue to grow, rather than forming the stubby fruiting spur required. Therefore if the tree is pruned too early, there will be little or no fruit next year.

Thus, it's better to watch out for the tree itself to tell you when it's ready to be pruned. The key is to look at the tip of the shoot. If there's a tight bud as shown above, then it's time to prune. 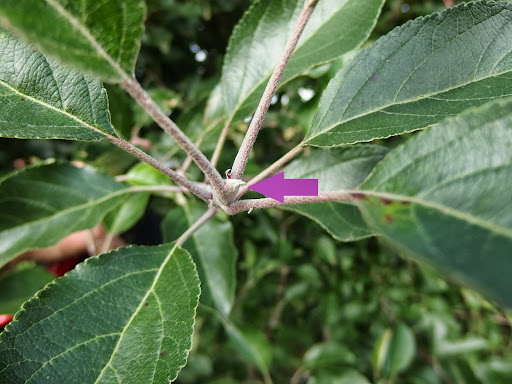 Here's the same picture with a large purple arrow helpfully pointing to the tightly formed bud. This shows the tree has started to hunker down ready for winter and the pruning of this shoot will produce the desired fruiting spur for next year.

At Waterperry they've found this is usually mid September, rather than the August mentioned in the RHS guidance. This year it was even later - we were there late September and the tighter buds were only just beginning to form.

The pictured shoot is usually pruned down to 'three leaves'. This involves finding where the shoot joins the main branch, ignoring the basal rosette of leaves found at this join, then counting up past three leaves along the branch.

At Waterperry they've found counting along four leaves works better for their soil conditions and aspect. The pruning cut is angled so that the minimum of rainwater hits the wound whilst it's healing. 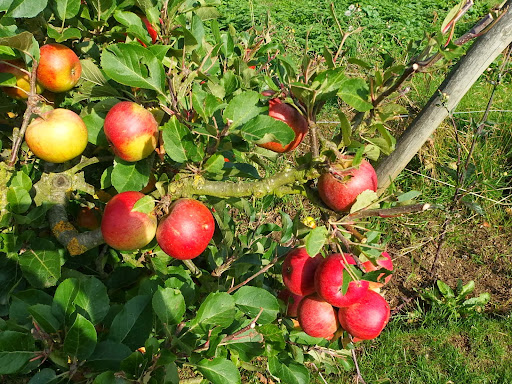 I was concerned this later pruning wouldn't give the fruit enough sunlight to ripen, but as you can see from the above photo, it isn't a problem.

So by ignoring the guidance re timing and paying attention to what the tree is telling you instead, your apple tree has a much better chance of fruiting well next year.
Apple Day Breaking the Rules Fruit n Veg Techniques