October 11, 2013
Q What does an ABBA tribute band, Arnold Schwarzaneggar and a cobbler have in common?
A They were all mentioned in the latest talk given by Mark Diacono

This was the last in the series in support of Horatio's Garden hosted by the Yeo Valley Organic Garden. It was an inspirational finale to see how Mark's ideas outlined in A Taste of the Unexpected have developed since publication a couple of years ago. Expect to see much more in his next book, New Kitchen Garden, where from this sneak preview I'm anticipating lots more unusual fruit and vegetables, a hat tip to techniques such as forest gardening and plenty of edible perennials.

I also came away with a new salad leaf to try for The 52 Week Salad Challenge: Siberian purslane (Claytonia sibirica). It's a short-lived perennial, which is suitable for shade and has a beetroot flavour. The stem, leaf and flower are all edible and it's one for the spring and summer months. 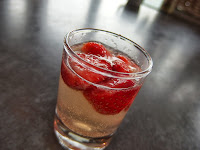 Mark is developing a bit of a reputation as far as cocktails are concerned as he's often the popular provider of such delights at various RHS shows. Last Friday was no exception and we got to try a couple before lunch.

Mark has promised to blog the recipes soon, so I'll add the link when he's done so. In the meantime, here's a photo to tempt you.

We also learnt Horatio's Garden is now a charity in its own right. As well as looking after the original garden in Salisbury, the aim is to provide one for each of the other 11 spinal units around the country.