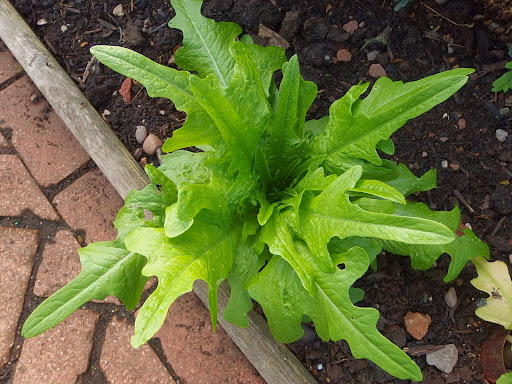 As my salad challenge is Mastering Lettuce this year, I was surprised to find a completely new form (to me anyway) at the Yeo Valley Organic Garden recently. This is 'Lattughino verde', which looks more like a giant wild rocket than a lettuce. Its flavour is mild, so it's one for adding bulk and visual appeal to a salad.

Most of the online information - unsurprisingly - is in Italian, but I have managed to find it in the Organic Gardening catalogue. They've put it in the loose leaf category and describe it as 'an Italian finger lettuce'. They have another of this type which looks tempting called 'Catalogna'. It's described as 'slow to bolt, hardy and quick regrowing' - sounds like an excellent candidate for the picking method.

I've added both varieties to my list of new leaves to try for next year along with the 'easy watercress' (aka Cardamine raphanifolia) Emma Cooper found at the Edulis nursery last weekend. She says it's a good alternative to the American land cress I usually grow. It's a shade loving perennial which starts back into leaf around now - I have just the spot in my garden calling out for this. Let's not forget the Siberian purslane Mark Diacono also mentioned in his talk recently.

It's reassuring to find there's still lots to learn and try after nearly two years of my 52 Week Salad Challenge. What salad plans are you making for next year?

If you've written a salad-related post this month, then add the URL of your post (not your blog) to Mr Linky below.
52 Week Salad Challenge Fruit n Veg Salad Days