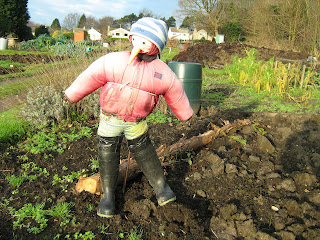 Last week the National Trust announced it's going to make 1,000 allotments available on its properties. Demand for allotments is soaring (100,000 nationwide apparently) and it appears all sorts of initiatives are starting up in an effort to meet it. I've already reported on the new allotments in nearby Bradford on Avon and according to our local TV news a number of farmers here in the south-west are starting up similar schemes. I wonder if this is because after two poor summers, they're needing to find an additional income, but the current low demand for new properties means developers aren't sniffing around willing to buy up their land.

The Trust are the latest to sign up to Landshare, a great initiative set up by Hugh Fearnley-Whittingstall [which sadly closed in 2016 - Ed]. This aims to match landowners with spare land with people who want to grow their own, but don't have the land to do so. About 40 National Trust properties will be involved across England, Wales and Northern Ireland, in addition to those like my local Lacock Abbey which already has allotments in its walled garden. If it proves popular, they may well release more land into the scheme. National Trust visitors needn't worry, the Trust won't be spoiling those lovely garden views you've come to expect. On the whole, derelict land previously used for cultivation or tucked away will be used for the scheme.

Hopefully this good news will spread to Chippenham. The waiting list for an allotment here now stands at 100 (it was 70 last summer - both figures are from previous anonymous comments I've had on my blog) - it would be great if someone could make some land available to meet our town's continuing demands for grow your own.

Update 26/2: Jane Perrone's come up trumps in The Guardian today. I wanted to write about the Garden Share and canal barge growing schemes which I'd read about previously, but hadn't found anything to link to for this piece. Now I can, so there's even more allotment good news to share with you :)

Update 27/11/2019: it's clear that allotment/land sharing schemes are ever changing with plenty of schemes starting which often falter after a few years or so. If you're interested in this kind of initiative, then it's best to seek more up to date information than this and other blog posts give. Look for local community gardens, the Incredible Edible network and similar schemes in your area.
Allotment National Trust news