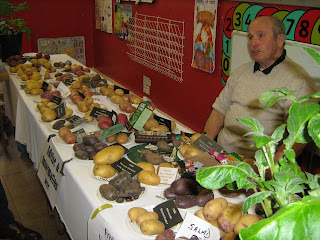 Malmesbury had its first ever potato day on Saturday, so of course I couldn't resist going to have a look and renewing my acquaintance with 'Taffy Tatty', one of the great characters of the potato world who grows around 400 varieties to gold medal winning standard. Here he is, telling us a joke about what it's like in heaven for allotmenteers who go there. In front of him is an impressive display of potato varieties, some of them extremely rare. Sadly there was no sign of the Lumper potato variety this time (he does usually have a plate of them on show) - this was the variety which succumbed to potato blight in the 1840s, thus sparking off the potato famine so devastating to Ireland.

Potato Days are an initiative started by Garden Organic in the 1990s. They were concerned at the lack of varieties available in the shops and set out to change this. Now potato days are held all over the country at this time of the year, but this is the first time one's been held so close to home. The great thing about them is not only the wide variety of different potatoes on offer (46 in this instance, including some organic), but they also can be bought singly instead of the usual bulky nets of at least 20. I decided on just two this time as Threadspider and I had already placed our order before I knew about this day. I've gone for Yukon Gold and Edzell Blue, two varieties which have always intrigued me, but not sufficiently to merit buying a whole net full. I also stocked up on my onion sets (Red Baron and Centurion) and then NAH and I settled down for a well earned cuppa (Fairtrade) and a very gooey piece of chocolate cake - yum.

David at Greenseeds organised the day - a local business he started just a couple of years ago to supply organic vegetable and herb seeds at reasonable prices. I'm hoping I can persuade our allotment society to register with him - we'll get a 10% discount if they do, without anyone having to co-ordinate a giant seed order on behalf of everyone. It would be great to support a local business and have the flexibility to order from someone as and when seeds are needed in addition to the D.T. Brown scheme we currently enjoy. NB he also sells paper potato sacks - one of the most frequently asked questions up at the allotment at potato harvest time is where these can be got hold of instead of the usual hessian ones on sale. Well, now we know - and I bought 4 of them on Saturday :)

Congratulations David and I hope it went well enough at the weekend so you'll organise another Potato Day for next year - I'd like to be back for lots more spuds next time.
Allotment Events Fruit n Veg time out Wiltshire