GBBD - After the Snow 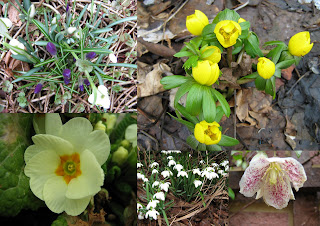 The snow's almost gone. It's lain around for the longest period I can remember since moving down here 25 years ago, but the flowers are emerging as if waking up after a nice little nap. If anything they seem to be a bit perkier after their ordeal and I wonder if there's some truth in the alternative name given for late spring snowfall - poor man's fertiliser.

New this month are the crocus and winter aconites shown at the top of the collage. The aconites are just clear of the snowline and will soon be forming a river of gold in the top part of my front garden. The crocuses are just peeping through and should open more fully in the next few days. Clematis cirrhosa 'Freckles' is showing what a stalwart she is for the winter months. The snowdrops are the lovely double form - from the back garden this time. I can't tell you how many there are as some of them are still buried in snow. The primroses are now in their eighth month of flowering. Elsewhere violas, winter honeysuckle and perennial wallflowers have a few blooms and there's one single Kerria japonica flower. The viburnums and pulmonarias have been totally knocked back by the recent frosts their flowers having turned to mush.
Lots of tantalising buds are beginning to show around the garden despite the major freeze they had last week. That's made up for during the day if the sun comes out - it's beginning to have a real warmth about it and coaxes my plants to show themselves a little more each day. All around life is stirring itself - exciting times indeed.
Garden Bloggers Blooms Day is hosted by Carol at May Dreams Gardens.
Garden Garden Bloggers' Blooms Day plants