Tagging Along: A Quick and Easy Photo Meme 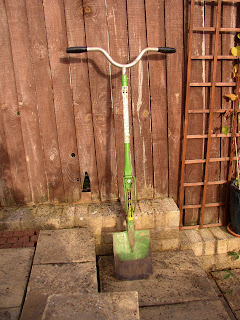 Frankie over at Veg Plot tagged me last week with a neat photography meme. All you have to do is to go into your computer's photography folders, go to the 4th one listed, find the 4th photograph there, post it on your blog and then write a little about it. I expect Frankie thought I was a shoe-in for a nice flower picture or scenery to show you: little did she know one of my earliest forays into digital photography was this picture of a Terex Autospade!
When I mentioned these to Soilman at his hilarious first webcast last Sunday*, he thought Terex Autospade sounded like an American secret agent and I can see his point. However, this unlikely looking object is an absolute godsend during the autumn digging season as it uses the principle of the lever to take the back breaking work out of digging. Mine was my first ever purchase on eBay as Wolf discontinued their manufacture about 30 years ago. However, I see that another company has started making them again recently - appropriately renamed The Backsaver - much to the delight of many an allotment holder, including Fred my allotment guru** and another Fred in his shed.

I also wrote about my autospade when I first started blogging, here you can see it posing proudly on a freshly dug plot in November 2007. It's bound to get those people who like tools very excited...

* = hilarious because Soilman spent a lot of time messing around with his broadcast software saying things like 'this is cr*p', 'is anyone still there?', 'oh gawd this makes me look fat' and doing filling in broadcasts just like the best of TV commentators do at royal occasions and President Obama's inauguration ceremony - except his consisted of descriptions of his allotment and asking if anyone had been up to theirs during the recent spell of bad weather.

** = another fact disclosed during the webcast on Sunday was Fred usually warns everyone about leek moth as he's usually first to notice it on his plot. I'll post a picture of the kind of damage it causes as soon as my plot's sufficiently dried for me to venture onto it again - you know what happened the last time ;)

As is usual with these memes I'm supposed to tag some of you (4 I believe) to see if you'd like to play along. However reading a number of people's blogs lately, I detect there's a need for a few fun things to do during February. Therefore I'd like to throw my tag open to anyone who'd like to play - just let me know what you come up with as I'd like to have a look :)
Allotment Blogging