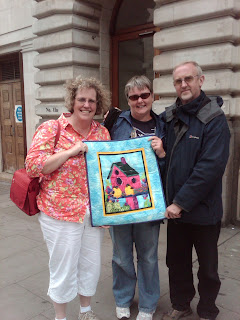 Serendipity* is the discovery of something by happy accident. That's how I made friends with someone in northern California after a mix up with our email addresses. We got writing to each other a few times a year and finally after 11 years correspondence, I got to meet her (with lovely husband who took the above picture) in London yesterday. I for one hope it's not the last time we get together - yesterday was too short!


So for once, I'm breaking with tradition on my blog and showing you a very happy photo from yesterday which includes myself and NAH. This was taken at the presentation to me of my friendship quilt and was instantly emailed for opening when I got home last night. I still have a massive grin on my face after yesterday's exploits - more touristy/public planting kind of posts to follow. For me, it's amazing how that tiny confusion with an e-mail address, led to us finding a like-minded, fun friend a mere few thousand miles away.

* = I thought you might like to know a little about the origins of the word serendipity. It was coined by Horace Walpole, explaining it further in a letter he wrote in 1754 to his friend Horace Mann, who was living in Florence at the time:

I once read a silly fairy tale, called The Three Princes of Serendip: as their highnesses travelled, they were always making discoveries, by accidents and sagacity, of things which they were not in quest of: for instance, one of them discovered that a mule blind of the right eye had travelled the same road lately, because the grass was eaten only on the left side, where it was worse than on the right-now do you understand serendipity?

According to the Times Higher Education supplement a few years ago, the word serendipity hasn't been used that much in our language even though a number of our most important scientific discoveries - x-rays, penicillin and gravity for example - are said to have resulted from it. I am therefore more than happy to increase the score for serendipity today.

What discoveries have you made that can be attributed to serendipity?
time out