July 02, 2009
It's a while since we've had much in the way of veg talk here, so I'm rather pleased to have found three veggie related bloggity blog fun ideas to share with you today. First up is Carrie, from Grow Our Own, who's rather a whizz with her camera and has come up with a clever quick meme for us to show off our allotment or house signs. 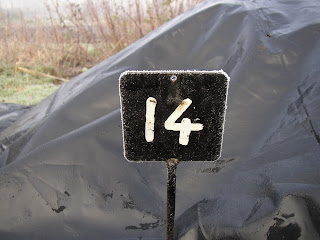 I don't know whether it's the same for all allotments (aka Victory Garden if you're across the pond), but my agreement says I need to have my number clearly displayed at all times. I actually have a couple of them as it's easy for my plot to be mistaken for 2 narrow ones. In fact when I took it on I thought I only had the left hand side (looking from the top) until I realised my number was actually on the right. Unlike Carrie's allotment site - which has the lovely quirky individuality I envy - our numbers are all on the same little black metal stakes as pictured. If you'd like to join in Carrie's meme, post a picture of your number and leave a comment over at her blog. 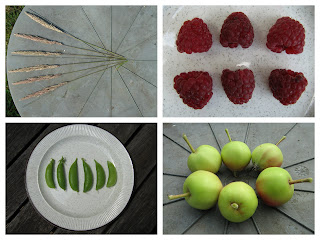 Last year I missed Matron's trug display by a couple of days, so I'm pleased she has another produce show 'n tell for us this year at Down on the Allotment. She has a Worldwide Veggie Show at the moment and you simply have to show her 6 of one of your crops which will either make her salivate or smile. Of course both would be double plus good. I cheekily suggested aphids were my best crop this year, but the critters wouldn't stay still long enough for me to get a good shot of them. My second best crop this year is grass. You wouldn't believe how difficult it was to find 6 grass heads of 1 species that were similar in size and colour. I think the use of my water butt lid to stage my entry is a rather nice touch ;)

As with all my show entries last year, I couldn't resist showing off my Autumn Bliss raspberries, plus some results from my RHS mange tout & sugar snap pea trial - the variety's Sugar Ann. Finally, I made use of some of yesterday's Scrumptious thinnings before consigning them to the compost heap. If you'd like to take part, all you need to do is send your entry to Ahhmatron@aol.com by 14th July. She's got further details and lots more examples if you go and visit her here :)

Finally, Pat and Steph of Bifurcated Carrots fame are proposing another Food Growing Bloggers' Meeting for 2009. I went to the inaugural one at Oxford Botanic Garden last year and it was a great day out with lots of like-minded people. This year's will be in September or October depending on most people's availability; will probably be at the same venue and may take on a potato and seed saving flavour depending on the extra guests Pat and Steph can assemble for us. The cost is likely to be around £15, which includes room hire and admission to the Botanic Garden. Interested? Then do leave a comment for Pat and Steph here, where you'll also find more information about the proposed day.

If you've seen any other blogging fun going on at the moment - veggie related or not - do let me know.
Allotment Blogging Fruit n Veg time out