In the second year on my allotment, I sowed a freebie packet of mixed nasturtium seeds to draw nasties like blackfly away from my crops. Their cheerful orange and yellow blooms were a most decorative addition, even though they declined to climb up the arch provided but decided to sprawl over my beds instead. And yes, blackfly were drawn to them like a magnet.

Since then, I've had tons of nasturtiums blooming away at the 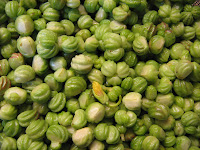 bottom of my plot every year. I've tried in vain to keep them under control, but to no avail - even last year's 'Chelsea chop' experiment only dented them for a little while. I don't really mind their presence, after all they are attractive and I've even managed to persuade NAH the leaves and flowers are a great addition to our salads. As he doesn't take too kindly to vegetables at all, I'm surprised he's cheerfully eating flowers, but then their peppery flavour is very similar to the watercress he loves. 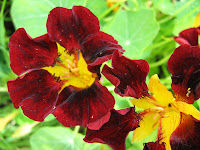 I've been aware for a while we're not taking full advantage of the seeds, which are also edible: they can be pickled and used like capers. Now, we do eat quite a lot of capers - on pizzas for instance - so it makes sense to give them a try. I'm sure there'll still be plenty of seeds left over to self-sow themselves next year. BTW I'm also getting velvety red flowers these days as well as the orange and yellows from the original mix - aren't they great?

I've used the recipe from River Cottage's Preserves: in there it says not to use the seeds tinged with red, but doesn't explain why. I tasted both the reddish and green seeds prior to pickling and couldn't detect any difference: they both had that characteristic nose blow inducing hot pepperiness I love. I've separated out the reddish seeds from the green ones and I've pickled a jar of each, for comparison purposes.

Makes 2 x 115g jars.
NB If you've got a lot of windfall apples, especially after last week's gales, you might like to try my delicious recipe for Windfall Cake from last year. I'm also enjoying stewed windfall apples (finely chopped and microwaved for a couple of minutes) with my daily bowl of porridge for breakfast at the moment :)
Allotment Food n Drink Fruit n Veg Incredible Edibles pests n diseases plants recipe