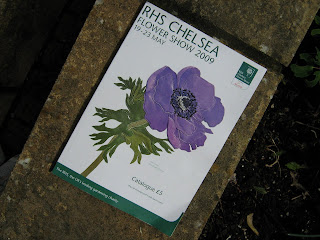 Chelsea might be pruned and credit crunched but I'm still going for my first taste of the big one with my friend H tomorrow. I've been poring over the catalogue the past few days to make sure we get the best out of our day. If this is a smaller Chelsea, I dread to think what a 'full' one must be like, it looks huge as it is. I believe we're going to have to run round in order to see it all.
Now Chelsea does have its detractors and I agree with a lot of what's been said, but I also have to say it's pretty much the only time when gardening gets plenty of coverage and makes headline news. Yes, the amounts spent on some of the show gardens can be obscene, but I was impressed at how Cleve West's show garden last year helped to raise awareness of Alzheimer's and dementia, a subject that's now rather painfully close to my heart as is the lack of decent gardens at most care homes. I've also nicked used a few ideas from the show gardens over the years, so I think it's about time to experience Chelsea for myself.
So what am I looking forward to? There's quite a bit on public planting this year with Nigel Dunnett's Future Nature and Marshall's Living Street show gardens. I'm particularly hoping to talk to Nigel as I believe as his kind of planting is just what Chippenham needs. I haven't been able to resist having a snigger at one of the show gardens being sponsored by a brand of loo paper, so I'm curious to see how this one turns out. A plasticine show garden is bound to set the tongues wagging too. In The Great Pavilion I'm hoping to bump into Jekka McVicar and the lovely Raymond Evison. Birmingham City Council also have a stand in there and seeing I walked past the parks department providing this display every day for 7 years on the way to school, I'm intrigued to see what they'll come up with. Blogging buddies are set to be there both in official and visiting capacities, so I'm hoping to meet up with some of them too.
As Malvern showed so well, one of the great strengths of blogging is the immediate and very different perspectives presented by several people, thus giving us a much more rounded coverage of the event. It's no different with the build-up to Chelsea. So far Graham Rice has previewed most of the plants to be launched at the show; Victoria has looked at some of the show gardens; Cleve West tells of his experiences of the build-up sans show garden for a change, Claire Potter shares her first experience of a Chelsea show garden build and James has a pot pourri of predictions. The RHS and the BBC websites also have extensive coverage. No doubt we'll also get lots of reports from the show itself over the next few days.

For those of you visiting Chelsea or glued to the coverage on the telly, Martyn Cox has thoughtfully provided a celebrity bingo card for some fun and games this week. I suspect the TV watchers will have an easier time of it, but I'll be looking out for some paparazzi style photo opportunities to go with mine plus my reports from the show ;)
Events RHS Showtime time out