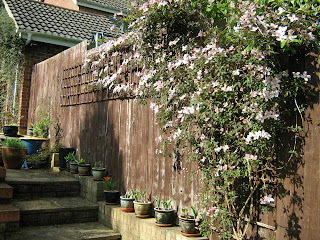 ... Project Update
How time flies! We're about a third of the way through the year, so I thought it would be good to review my list of projects for 2009 to see how things are going.
Blogging
Public Planting - lots of posts plus lots from you! Thanks for your contributions thus far and don't forget the next episode of the Out on the Streets meme is due next month.
Front garden quirkiness - to follow and 3 gardens found thus far - I have a steam engine (which also featured briefly in How Britain Got the Gardening Bug if you watched it), a garden of car hub caps plus one with every conceivable solar powered lamp. If you know of any others, do let me know.
Garden
I've mulched the garden and cleared about a third of the bottom bed for its makeover. Progress has been slowed by the amount of ivy that's crept in from the public land that needs ripping out, plus Clematis 'Francis Rivis' is looking so lovely at the moment I can't bear to cut it back.
After taking advice at the RHS Show in London, the back fence will no longer have any vertical gardening as it isn't strong enough. Instead I've invested in a couple of pots to add the vertical interest and as you can see from the picture, the Clematis on the fence is making great strides.
The patio strawberry bed to herb/salad conversion is now going to house the asparagus bed instead as I've decided I can't get my allotment space weed free enough in time. The salad succession project has transferred to a tray and pot system and the herbs have been transferred to bigger pots. I've also started an extra project: growing potatoes in compost bags.
Final decisions are still to be made on what to do with the conifers and the lawn area, though NAH seems to be rather taken with the idea of making an extra couple of beds out of part of the lawn. In the meantime I've revamped one of the terrace beds to include poppies, Echinops, Euphorbias and more Echinacea. A couple of miracles have occurred: I've remembered to stake the plants that need it before they flop over and there's less plants in the nursery area than at the start of the year in spite of my recent purchasing activities :0
Allotment
Progress has been slow here as my back/calf injury slowed things down just at the time when most of the work needed to be done. Consequently the gooseberries are still there and covered with lots of fruit, the replacement apple arches and cordons haven't been started and the weeds have gained the upper hand again! This is where my main activities will be focused over the next month or so.
How do you think I'm doing so far?
For other Perfect P Posts, do visit the ABC Wednesday blog.
ABC Wednesday Allotment Blogging Design Garden