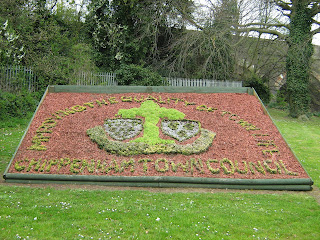 Chippenham Town Council must be rather proud of this public planting as it's at the top of their latest newsletter. The logo in the middle is the town's coat of arms and the lettering reads:
Improving the quality of town life
Chippenham Town Council
It's an example of carpet bedding - a floral art which came to prominence in Victorian times when public planting schemes would have intricate designs composed of thousands of plants - usually colourful annuals - and there'd also be bizarre objects like floral clocks which did actually tell the time (Edinburgh still has one) and pictures made up entirely from plants. It's a dying form in most places as it's expensive to do: for both the initial outlay on plants and labour and it also needs a lot of ongoing maintenance. The plants need to kept from growing out too much, else the designs lose their sharp outlines. Another factor in its decline has been the decrease in corporation greenhouse facilities for growing thousands of plants.

Towns famed for their floral displays will still pay homage to the art, like I saw at Weymouth last year and some places also have giant 'plant sculptures' usually formed from thousands of Sedums and Sempervivums. I've seen them in nearby Bath and Salisbury, so I'll keep an eye out for this year's designs. I wonder if many of the towns and cities continuing with this style of bedding source their plants from here.

I've driven past Chippenham's example many times and I've been quite surprised to find one in the town, especially as it's a more labour intensive form of planting compared to the other ones I've shown you. On closer inspection to take the picture for this article I realised that compromises have been made: only the coat of arms and words are actual plants - Sedums and Sempervivums for the coat of arms and a rather poorly looking small leaved Euonymus for the letters - the rest of it is that red mulch again. For once I feel the mulch has added to the decorative effect. All the plants chosen are relatively slow growing (and cheap), so it requires little ongoing maintenance.

Whilst it doesn't match the floral art of past times or towns with a much larger budget for public planting, I think this is a much better effort for Chippenham than usual. There's hope for us yet.
Chippenham Public Planting