Book Review: The Spade as Mighty as the Sword 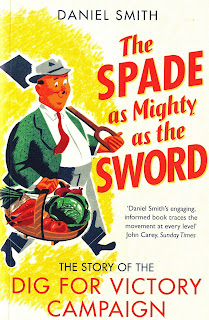 With the benefit of hindsight it's easy to see how unprepared Britain was for the Second World War. In Daniel Smith's The Spade as Mighty as the Sword we see just how close the nation's reliance on food imports at the war's outbreak nearly cost us dear.

Then the Dig for Victory campaign was born and caught on with the British public big time. A catchy title, inventive posters and the reassuring voice of Mr Middleton all helped to turn the nation into allotmenteers. They had to, it was either grow more food or starve. Around 55-60 per cent of families were involved in the campaign and the WI provided the domestic network which ensured everyone knew what to do with any surplus.

We may look back on the Dig for Victory campaign with fondness, as an example of where state intervention for once really helped and the nation's diet was far healthier than we see today. However, Daniel Smith's clear-sighted tale shows success wasn't gained without controversy and resentment. I hadn't realised that two government ministries were involved (Food and Agriculture) and they didn't always pull together. I also hadn't realised that Mr Middleton, the nation's first celebrity gardener, wasn't that keen on growing vegetables!

It's interesting to see the government calculated that just under half a man's daily calorie intake (1,200 out of 2,500 calories, up from 900 at the war's outbreak) was provided via domestic production. Seeing most of this was mainly via vegetables (relatively low in calories compared to meat), it's an impressive increase.

As food security is poised to become an increasing issue, I wonder whether we could do this again? As an allotmenteer, I get some reassurance from the fact I can ensure NAH and I continue to have enough tasty food on our plates. I also wonder whether our diet would be as dull (though nutritionally adequate) as the wartime diet was. Would we give up growing the more exotic crops such as courgettes and peppers which have become popular in modern times, in favour of more productive potatoes and cabbages?

This is a well-written, chronologically told story, which has given me lots of food for thought, especially seeing I revisited this book for today's review in a week when Elizabeth has spent a fascinating five days taking part in the Live Below the Line campaign.

Disclosure: I received a review copy from the publisher. I also reviewed Twigs Way and Mike Brown's Digging for Victory a while ago. Whilst both cover the same subject, they're both well worth a read.
Books Greener Living