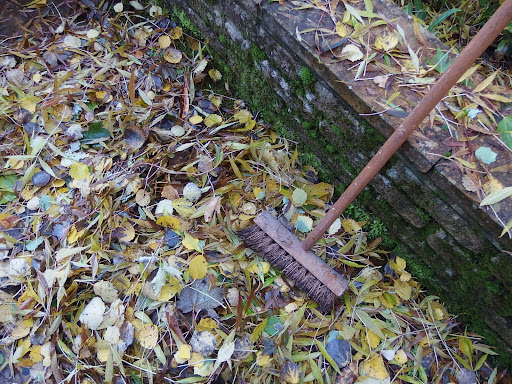 Look at any list of gardening jobs published for this month and I bet most of them - if not all - will have 'make leaf mould' on there. Now leaf mould is a very good thing, but the problem is I have more leaves than my leaf mould bin can take. And like many urban gardeners with a modest plot, I've run out of space to build another one. Besides, when I come to empty it next year, there'd only be a thimble full* of lovely crumbly stuff to use.

This year I've decided to learn from my shady borders in my front and back garden. They're beneath the trees on the public land, so they quickly get covered with a thick layer of  leaves in autumn. It means I never have to mulch these borders and all the plants get snuggled down for winter with very little effort on my part.

So I've decided to extend this principle of 'compost direct' to other areas of the garden. Many of my plants - like my dahlias - need mulching in the autumn to protect them from winter's worst and it's allowed them to survive without lifting**. Therefore, the leaves you can see in the above picture will form the start of my dahlia duvet this year.

This isn't so much breaking the rules as ignoring one and placing greater emphasis on another by focusing on the mulching side of things. It also means less effort as I won't have to take the leaves all the way down to the bottom of the garden. Most of them will go on the terrace beds in the middle instead, which are handily placed right by the patio where most of the leaves have accumulated.

My only regret is I haven't thought of this before.

Is there anything you're doing differently this autumn?

** = don't try this if you garden further north - remember I'm in the softy south. Leaving dahlias to overwinter under a thick layer of protective mulch can be tried south of a line drawn between the Wash and the Severn estuary, but success also depends on your garden's aspect, soil and height above sea level.
Breaking the Rules Greener Living Techniques